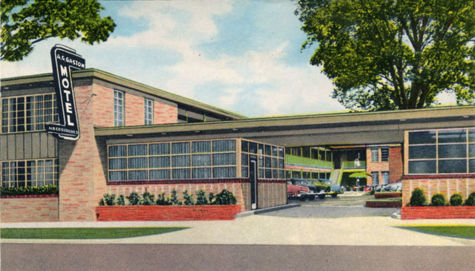 Gaston struck upon the idea of building a motel while he and his wife, Minnie were representing the African Methodist Episcopal (AME) Church at the 1951 World Methodist Council in Oxford, England. While there he learned that the National Baptist Convention's Sunday School and Baptist Training Union Congress was considering Birmingham for its 1954 meeting. Knowing that Black visitors would have trouble finding adequate lodging, he set out to fill the need. After his return he studied motels, especially the successful Holiday Inn chain, which served as a model for the Gaston Motel. The building was designed by Stanley Echols of the Brooke Burnham's architectural firm and constructed by the Steel City Construction Company. Gaston exceeded the basic needs of travelers, embarking on "a real adventure in providing something fine that I believe will be appreciated by our people," as he told a Birmingham News reporter.

In January 2015 The Birmingham City Council approved $10 million in public funds for redevelopment of the motel site as a "Freedom Center". A portion of the historic hotel would be preserved and restored. New buildings would function as an extension of the adjacent Birmingham Civil Rights Institute, housing additional program space along with new academic facilities. The center, which was never built, was to have been marketed as a potential home for a U.S. Institute of Human Rights.

In late 2016 the city deeded over a portion of the property to the National Trust for Historic Preservation for the purpose of establishing a Birmingham Civil Rights National Monument. President Barack Obama created the monument by proclamation on January 17, 2017 giving the National Park Service responsibility for developing a management plan to preserve and interpret the various objects and sites relating to the Civil Rights Movement in Birmingham.

The approved city funds from 2015 were put toward restoration of the building in two phases, with architect Jack Pyburn of Atlanta, Georgia overseeing the restoration plans and A. G. Gaston Construction carrying out the work. The first phase, dedicated on March 10, 2021, stabilized and restored the exterior of the 1954 wing and re-roofed the entire hotel, as well as restoring the interior of room 30. A recreation of the motel's neon sign, made with LEDs, was also included in the first phase.

A second phase, scheduled to be completed in summer of 2022, would restore the restaurant, the courtyard, and the 1968 wing. The Andrew W. Mellon Foundation of New York City awarded the project a $1.1 million grant.