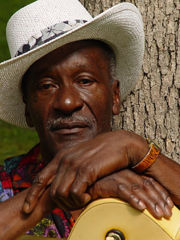 Bell was the son of a miner who died two months before Adolphus was born. He grew up in Luverne, Crenshaw County, working on farms. He moved with his mother to Pittsburgh, Pennsylvania in 1962 and learned guitar from neighbor George Benson, eventually joining his "All Stars" band as a bassist. During the 1960s he played around the city with his own quintet called Adolphus Bell and the Upstarts. He dubbed his 1960 Gibson guitar "Pawnshop" because every time he bought it back out of hock it had a more bluesy sound.

Discouraged with the unreliability of his bandmates, he experimented with singing while playing guitar, bass drum and high-hat himself. He played Pittsburgh, then began touring the country in a station wagon he bought with lottery winnings. He painted "One Man Band" on both sides to advertise his music.

Bell moved to Flint, Michigan with his sisters around 1970 and continued playing, supplementing club gigs with street performances and bookings at senior centers and jailhouses. He also spent a lot of time on the road. During an extended visit to Atlanta, Georgia in the mid-1970s, Bell was arrested for playing without a permit, but public pressure on Mayor Jackson led to an eventual order that police leave him alone.

In the late 1970s, Bell headed west to try his luck in Los Angeles and Las Vegas. He worked as a regular casino employee and put his music on a back burner. The highlight of his sabbatical was a $200 tip from Telly Savalas. He eventually packed up his station wagon and wound his way back through the South until he found himself back in Alabama. After a brief stay in Birmingham he settled in Gadsden in 1980 and took a day job at a chicken plant while he pursued blues gigs at night. He returned to Atlanta in the late 1980s and landed a regular booking as a "street busker" at Underground Atlanta. After the 1996 Olympics Games he returned to Birmingham.

In 2004, Bell was contacted by the Music Maker Relief Foundation, which organized international tours and produced an album. He drove a brown van with his "One Man Band Show" advertised on the side panels until lung cancer forced him to stay at home. The foundation continued to help Bell with expenses and encouragement. He died in October 2013 and was buried at Oakland Cemetery.