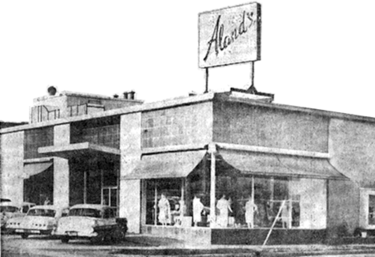 Aland's was a Birmingham-based chain of specialty women's clothing stores.

Aland's Inc. was incorporated on July 1, 1964 by Ralph Aland, president, Jack Levin, vice president, and Jack Aland, secretary-treasurer. It opened its first retail location in a remodeled building at 2226 Bessemer Road in Five Points West on November 5 of that year.

The 11,000 square foot store, designed by Henry Sprott Long & Associates, featured an expansive line of sportswear, a balcony with ready-to-wear fashions, separate departments for "junior petites" and "tall girls", and uniform, millinery and lingerie sections. The interior was decorated in pecan wood with gold, off-white, and beige accents and textured wall coverings.

The chain had locations at Eastwood Mall in 1966, Western Hills Mall and, beginning in 1974, at Hoover Mall. Later the store leased showroom space to an independent men's clothier.

Aland's Inc. was dissolved on September 30, 1992 and the stores were sold to another operator. The last Aland's location closed in early 1997.