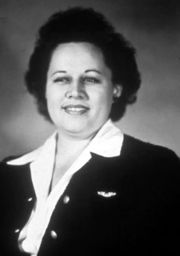 On November 30, 1954 Hodges was sick at home on Odens Mill Road in Sylacauga's Oak Grove community. She was sleeping on the living room sofa, bundled in quilts, while her husband, Eugene, worked with his utility crew near Alabaster. That afternoon a large meteorite streaked through the East Alabama sky, triggering aerial explosions as it broke apart. An 8½ pound fragment of the meteorite, approximately the size of a softball, crashed through Hodges' roof, glanced off a console radio and struck her in the left hand and hip, leaving a large bruise.

Ann's mother, Ida Franklin, was sewing in the next room and rushed to the front to find her daughter dazed and bruised, staring up through a hole in the ceiling as dust continued to settle. Ann summoned the police and word of the odd incident quickly spread through the community, attracting curiosity-seekers. The police summoned doctor Moody Jacobs to examine Hodges, and USGS geologist George Swindel, studying a nearby quarry, to assay the alien rock, which he was able to identify as a meteorite with some certainty. The press of onlookers and reporters clamoring for interviews overwhelmed Mrs Hodges, and Jacobs admitted her to the hospital to recuperate.

The "Hodges meteorite" was first confiscated by Sylacauga Police Chief W. D. Ashcraft, who, with Mayor Ed Howard, turned it over to U. S. Air Force personnel who came to the scene to investigate the possibility of an aviation crash or UFO. They took the rock to Wright-Patterson Air Force Base in Ohio for analysis, confirming that it was a meteorite. It was then delivered to the Pentagon, but public pressure and the intervention of Congressman Kenneth Roberts and the Hodges' attorney, Huel Love, eventually brought the rock back into the Hodges' possession. That December Ann brought it to New York City for an appearance on Gary Moore's nationally-televised "I've Got A Secret" game show, winning $80.

Meanwhile, the Hodges' landlady, Birdie Guy, filed a claim for ownership of the meteorite, hoping to make money from it to help pay for repairs to her damaged house. She agreed to sign away her claim for a sum of $500. The Hodgeses rejected a nominal purchase offer from the Smithsonian Institution, but were not able to attract enough paying gawkers to make money from their famous meteorite. They donated it to the Alabama Museum of Natural History in 1956 and it remains there on the campus of the University of Alabama in Tuscaloosa.

Hodges suffered a nervous breakdown and separated from Eugene in 1964. She died of kidney failure in 1972 at a Sylacauga nursing home and was buried at Charity Baptist Church Cemetery in Hazel Green in Madison County.