This article is about World Hockey Association team. For other uses, see Birmingham Bulls.

The Birmingham Bulls was a professional ice hockey team based in Birmingham that played in the World Hockey Association (WHA) from 1976 to 1979. Their home ice was the Birmingham-Jefferson Civic Center.

The franchise was moved from Canada where it was known as the Toronto Toros, however the Toros' logo was retained. Gilles Leger, the first head coach, stayed on as general manager after turning coaching duties over to Pat Kelly during the inaugural season. In 1979 the WHA folded and the team was supposed to disband. However, the Bulls returned in the 1979–1980 season as part of the Central Hockey League.

The Bulls' mascot was a blue bull-headed goalie. 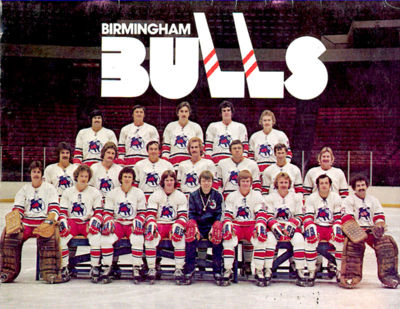 The Canadian Division of the WHA, which had been started in the 1974–1975 season, was disbanded and the remaining teams joined the Eastern or Western Divisions. When the Toros relocated from Toronto to Birmingham between seasons, they became part of the Eastern Division. Other teams in the division were the Cincinnati Stingers, the Indianapolis Racers, the New England Whalers, the Quebec Nordiques, and the Minnesota Fighting Saints, the last of which folded before the season ended.

The Bulls went 31-46-4, making them fifth in the Eastern Division, thus just missing out on the Avco World Trophy playoffs. However, Mark Napier, who had won the WHA's Lou Kaplan Trophy for rookie of the year for his inaugural season with the Toros the year before, was one of the top twelve scorers in the WHA that season. 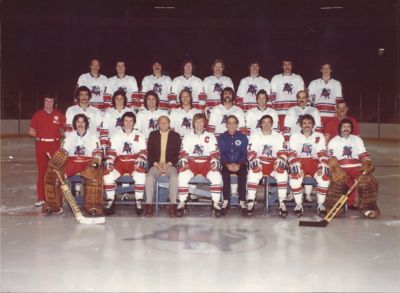 Three more WHA teams folded between seasons, bringing the total down to eight, which led to the elimination of the Divisions.

The team ended the regular season with a 36-41-3 record, putting them in sixth place and giving them a place in the Avco World Trophy playoffs. They played a series of Playoff games against the Winnipeg Jets, but only won one game to the Jets four and were thus eliminated. The Jets went on to win the trophy.

Sonmor left after one season to take over the NHL's Minnesota North Stars. John Brophy was named as his successor.

The Houston Aeros folded between seasons, leaving only seven WHA teams. But then the Indianapolis Racers folded mid-season.

The Bulls regular season record was 32-42-6, putting them sixth in the league and out of the Avco World Trophy playoffs, which only took the top five. The Bulls' final home game at the BJCC Coliseum was played on April 14, 1979. They defeated the Edmonton Oilers (with Wayne Gretzky) 7-6 before a crowd of 8,179. Despite not advancing to the playoffs, coach John Brophy was awarded the Robert Schmertz Memorial Trophy as WHA coach of the year. In addition, defenseman Rob Ramage was named to a WHA All-Star Team.

During the season, an agreement was reached whereby four of the WHA's teams would be admitted to the National Hockey League (NHL) as expansion teams for the 1979–80 NHL season, and the WHA would cease operations. The Cincinnati and Birmingham franchises were each paid a sum to fold.