From Bhamwiki
(Redirected from Birmingham Magazine)
Jump to: navigation, search 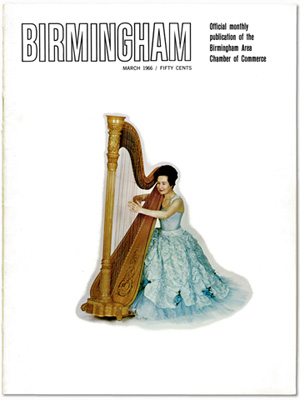 Birmingham magazine was a monthly lifestyle magazine which promoted the business and culture of Birmingham and the Birmingham area. The magazine debuted in the fall of 1918 and continued into the first years of the Great Depression before suspending publication.

A second edition of the magazine was launched on December 1961, under the auspices of the Birmingham Chamber of Commerce.

After the chamber merged with other groups into the Birmingham Business Alliance in 2009, the new organization sought a buyer for the magazine.

Birmingham News Multimedia took over publishing Birmingham magazine with the October 31, 2011 issue. A year later that group was absorbed into Advance Publications' Alabama Media Group, with outlets in Birmingham, Huntsville and Mobile.

In July 2020, partly as a response to the economic recession accompanying the 2020 Coronavirus pandemic, Birmingham magazine again suspended its print publication, and laid off several full-time staff members.