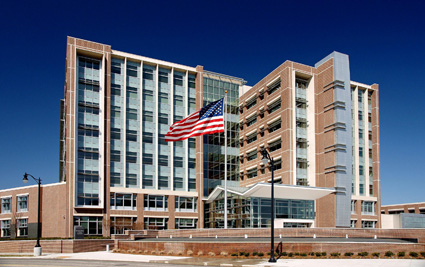 The Birmingham Social Security Administration Center is a 587,000 square-foot federal office building located between 8th and 9th Avenue North and 12th and 14th Street North in Fountain Heights. It was constructed by Opus South and is leased to the Social Security Administration, which moved from an older building near the BJCC. Ground was broken on December 8, 2005 and the building opened in January 2008 with 2,200 employees involved in processing payment checks and providing employee training. The building also houses a child-care center, an employees' credit union, a full-service cafeteria, a fitness center and an auditorium.

The eight-story building was designed by HOK Architects of Kansas City, Missouri in a collaboration with the developer and qualified for a silver rating from the Leadership in Energy and Environmental Design (LEED) program. Water is collected from a membrane roof atop the 1,765-space parking garage and used to irrigate 85,000 square feet of green roof, as well as perimeter planting beds. Lighting and environmental equipment is computer-controlled to maximize energy efficiency.

In September 2009 Opus South filed for Chapter 11 bankruptcy protection and the building was sold for $147 million to three investment partners.