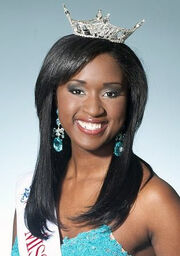 Briana Kinsey (born c. 1993 in Hoover) is an aspiring physician, founder of "Daring to Defeat Diabetes", and a beauty pageant contestant. She is representing the District of Columbia in the 2017 "Miss America" pageant.

Kinsey is the daughter of Robert and psychiatrist Velda Pugh Kinsey of Hoover. She graduated from Hoover High School in 2011, where she was captain of the dance team. She was named "Miss Jefferson County Outstanding Teen" in 2008 and "Miss Birmingham Outstanding Teen" in 2009. She went on to be crowned "Miss Birmingham" in 2012, "Miss Hoover" in 2013, "Miss Marble Valley" in 2013, "Miss North Jefferson Area" in 2014, and "Miss Leeds Area" in 2015.

Kinsey developed her anti-diabetes pageant platform because of several family members who live with the disease. Since 2011 she has raised more than $15,000 for the American Diabetes Association through numerous events, including the "Dance Away Diabetes" dance team competition at the Riverchase Galleria. She also created a Girl Scout merit badge for diabetes awareness.

With her pageant scholarships and a presidential academic scholarship, Kinsey completed a bachelor's degree at the University of Alabama in 2015, majoring in biology and pre-medical studies. She is currently attending American University in Washington D.C. and working as an eyewear consultant.