From Bhamwiki
(Redirected from Carl Elliot)
Jump to: navigation, search 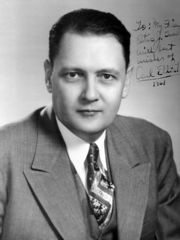 Carl Atwood Elliott, Sr (born December 20, 1913 in Franklin County - died January 9, 1999 in Jasper) was an attorney and a member of the United States House of Representatives for eight consecutive terms from 1949 to 1965, representing the 7th District of Alabama.

Elliott was the oldest of nine children born to Will and Nora Elliott on their tenant farm in the community of Pleasant Ridge in northwest Alabama's Franklin County. He graduated as the valedictorian of his Vina High School class of 1930, even though he was only 16. He was able to afford to continue his studies at the University of Alabama by working a variety of jobs around campus and sleeping in the vacant campus observatory. Among his duties were serving as a dining hall steward and tutoring students, included Paul Bryant. He received his undergraduate degree in 1933 and subsequently enrolled in the University of Alabama School of Law.

While a law student, Elliott ran for the high-profile position of Student Government President. With the support of the growing number of out-of-state and female students, Elliott was the first outsider candidate to defeat "The Machine", a select coalition of fraternities and sororities which has long dominated campus politics. In 1936, Elliott completed his term as SGA President and graduated with his law degree.

Elliott then began his law practice in Russellville, near his hometown, but soon moved to Jasper. During his career as an attorney in Jasper, Elliott spent most of his time representing coal miners and their families. After serving as Jim Folsom, Sr's campaign manager for his unsuccessful 1942 campaign for governor, he enlisted in the U. S. Army in 1942, but was never deployed overseas due to injuries sustained during training. He was discharged as a First Lieutenant in 1944 and returned to his law practice, Elliott and Petree.

Elliott was twice elected a local judge in Jasper before running for U. S. Congress in 1948. His "Farm Boy to Congress" persona proved to be very popular among the working class in his district, and he unseated incumbent Representative Carter Manasco, to the surprise of many political observers. Upon winning the election, Elliott and his wife purchased a residence in the nation's capitol, and they would spend the next 16 years of their lives traveling back and forth between Washington, D. C. and Jasper.

Elliott represented the old 7th Congressional District of Alabama. He served on the House Veterans Committee, the Education and Labor Committee, and the Rules Committee and chaired the Select Committee for Government Research. He was a supporter of the New Deal under Truman and the liberal policies of presidents Kennedy and Johnson. He and fellow Alabamian Lister Hill co-sponsored the Library Services Act of 1956, which brought mobile libraries (bookmobiles) and continuing library service to millions of rural Americans. He also authored the National Defense Education Act of 1958 (NDEA), which improved science, foreign language and technology education nationwide and provided low-interest loans for college and graduate school for needy students. Both laws have been extended; more than 30,000,000 college students nationwide have obtained loans under Elliott's NDEA legislation.

Though he supported the Kennedy administration, notably on the House Rules Committee where he helped break numerous deadlocks, he deferred participation in anti-segregation debates, but also refused to join Governor George Wallace in denouncing the "scalawaggin', carpet-baggin' lyin' federal judges" who had ruled against segregation laws in the South.

The 1962 and 1964 primary elections were notable in Alabama because the state had lost a seat in in the 1960 census, but had failed to draw up new districts. Primary elections in each district produced nine candidates, which then ran in a "primary run-off" to leave eight candidates for the general election. Elliott won an eighth term in 1962, but fell victim to Wallace's anti-integrationist attacks in 1964. Though he had defeated Tom Bevill in the district primary, he finished ninth in the primary run-off.

Elliott challenged Lurleen Wallace for Alabama governor in the 1966 election. He campaigned on a platform of federal assistance to the needy, better education, and racial tolerance. He finished third in the primary, which had been marked by racial tensions, bomb threats, defaced campaign billboards, and Klan protests at several of his campaign speeches. 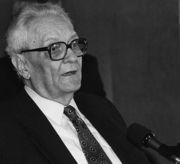 Elliott accepts the 1990 Profile in Courage award in Boston, Massachusetts

After Elliott's defeat, he slipped into political obscurity and poverty, having cashed in his Congressional pension and remortgaged his house to finance his gubernatorial campaign. He resumed practicing law, writing books about local history, and producing columns and book reviews for area newspapers. He founded Carl Elliott Books to publish works by local authors. His own writings include five volumes of Annals of Northwest Alabama, a history of Red Bay, and seven volumes of histories of coal miners.

Elliott was also active in civic affairs. He was a member of the American Legion, the Alabama Lions Club, an Eastern Star Mason, and a member of the Woodmen of the World. He served as a Sunday School teacher and steward at First Methodist Church of Jasper. He was inducted into the Alabama Academy of Honor in 1977.

Elliott received new recognition of his achievements in 1990, when he became the first recipient of the John F. Kennedy Profile in Courage Award. He traveled to Boston, Massachusetts to accept the award from Senator Ted Kennedy. His autobiography, The Cost of Courage: The Journey of An American Congressman, published in 1992, was reprinted in 2001 by the University of Alabama Press.

Elliott died following a long illness in 1999, still financially struggling. He was preceded in death by his wife, the former Jane Hamilton, and survived by their four children, Carl Jr, Martha, John and Lenora. He is buried at Oakwood Cemetery in Jasper. His former home in Jasper was purchased by Bevill State Community College and has been opened to the public as a museum of his life and career. The Carl Elliott Federal Building and Carl Elliott Regional Library in Jasper are also named in his honor. A one-hour TV special, Conscience of a Congressman: The Life and Times of Carl Elliott, was produced as an episode of the Alabama Experience documentary series by the University of Alabama Center for Public Television & Radio.