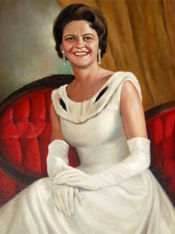 Lurleen Burns Wallace (September 19, 1926 – May 7, 1968), born in Tuscaloosa, was the Governor of Alabama from 1967 until her death and first wife of Alabama Governor George Wallace. She was Alabama's first female governor and, to date, only elected female governor.

Lurleen Burns was born to Henry and Estelle Burroughs Burns of Tuscaloosa. In 1942 she graduated from Tuscaloosa County High School at age 15 by taking summer classes. She then worked at Kresge’s Five and Dime in Tuscaloosa, where she met George Wallace. At the time he was a member of the U. S. Army Air Corps. They were married on May 21, 1943 when she was just 16.

Over the next twenty years, she focused on being a mother and a homemaker. She and George had four children. They were Bobbie Jo (1944), Peggy Sue (1950) Kennedy, George III (1951), and Janie Lee (1961) Dye, who was named after Confederate General Robert E. Lee.

Mrs Wallace assumed her duties as First Lady of Alabama in 1963 after George was elected governor. She opened the first floor of the governor's mansion to the public seven days a week. She also refused to serve alcoholic beverages at official functions. 1

In 1965 Mrs. Wallace was diagnosed with uterine cancer. She had a hysterectomy to remove the early malignant tumor and received radiation therapy, but died in May 1968. 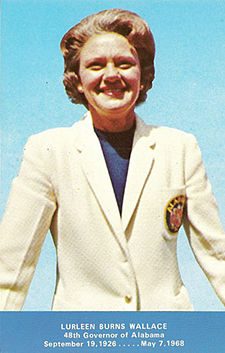 photo of Lurleen Wallace on a postcard
.

George Wallace had become very popular during his first term as governor (1963–1967), largely due to his opposition to racial desegregation. He could have easily won a second term in 1966 had he been eligible to stand for one. In Alabama (as in many states at the time), governors were not allowed to serve two consecutive terms. This provision was incorporated in the current state constitution in 1901.

Wallace attacked this problem on two fronts. First, Wallace worked for the repeal of the term limiting provision. Although he failed to achieve the change in time for the 1966 campaign, he eventually succeeded. Wallace served three subsequent terms, including two which were consecutive. Second, Wallace devised a plan in which his wife, Lurleen, would run for governor while he controlled the policies and procedures of the governorship in the background, duplicating the strategy in which Ma Ferguson won the 1925 election for governor in Texas.

Wallace's attempt to change the succession rule before the 1966 campaign failed. However, using his wife as his electoral surrogate succeeded, and Mrs. Wallace won the Democratic nomination for governor in 1966. She was elected Governor of Alabama in November 1966, and was inaugurated in January 1967.

She had made her gubernatorial run carrying a tragic secret. Lurleen Wallace had been diagnosed with cancer as early as April 1961, when her surgeon biopsied suspicious tissue he noticed during the cesarean delivery of her last child. As was common at the time, her physician told her husband, not her. George Wallace insisted that Lurleen not be informed. As a result, she did not get appropriate follow-up care. When she saw a gynecologist for abnormal bleeding in 1965, his diagnosis of uterine cancer came as a complete shock to her. When one of her husband's staffers carelessly revealed to her that Wallace had discussed her cancer with them, but not her, during his 1962 campaign three years earlier, she was outraged.

In order to facilitate his plan to use her as a surrogate candidate in 1966, Mrs. Wallace cooperated with a campaign of dissimulation and misdirection as she began radiation therapy in December, 1965. This was followed by a hysterectomy in January 1966. Despite her ill health, Mrs. Wallace maintained a brutal campaign schedule throughout 1966 and gave a 24-minute speech — her longest ever — at her January 1967 inauguration.

Early in her term, Mrs. Wallace's condition began to deteriorate. In June 1967, an abdominal growth was found. During surgery July 10, this proved to be an egg-sized malignancy on her colon. She endured a second course of radiation therapy as a followup. In January 1968, after extensive testing, she informed her staff (but not the public) that she had a cancerous pelvic tumor which was pressing on the nerves of her back down through her right hip. Even with the prior surgeries on her uterus and colon, and despite the radiation treatment, the cancer spread.

Her last public appearance as governor was at the 1967 Blue-Gray Football Classic in Mobile, followed by a campaign appearance for her husband's presidential bid on January 11, 1968. Her illness was obvious and worsening. The pelvic tumor was removed in late February. This was followed by surgery to treat an abdominal abscess, and in late March of 1968, more surgery to dissolve a blood clot in her left lung. By April, the cancer was in her liver and lungs, and she weighed less than eighty pounds.

Her husband, George Wallace, persistently lied to the press about her condition, claiming in April that "she has won the fight" against cancer. He continued to make campaign stops nationwide during her last weeks of life, but her doctors warned him she was in unstable condition on May 5, the day he was to leave for a Michigan sweep. At her request, he cancelled a television appearance May 6, when she was too ill to be moved back to the hospital. Lurleen Wallace died at 12:34 a.m. May 7, 1968, with her husband beside her and the rest of her family, including her parents, just outside her room.

She lay in state in the Capitol building May 8, and people waited as long as five hours to view her silver casket. Despite her emphatic pre-need planning request for a closed casket, her husband insisted that her body be on view, with a glass bubble over the open part of the coffin. The day of her funeral, May 9, all public and private schools closed, all state offices closed, and most businesses closed or had abbreviated hours. She was buried in Greenwood Cemetery.

At the time of her funeral, George had moved out of the governor's mansion and back to a home they bought in Montgomery in 1967. He did not take his children, ages 18, 16, and 6, with him. They were distributed to family members and friends. (Their eldest daughter had married and left home.)

Mrs. Wallace's most notable independent action as Governor was her attempt to get her husband to increase appropriations for the Bryce State Mental Hospital and the Partlow State School, a residential institution for the developmentally disabled. She had visited them in Tuscaloosa on her own initiative in February 1967 after reading a news story about overcrowding and poor staffing. She was horrified by what she saw in the filthy, barracks-like settings.

Mrs. Wallace was succeeded by Lieutenant Governor Albert Brewer, a one-time ally of her husband who soon showed a strong interest to govern in his own right and retain the office in the 1970 election. Brewer gained a seemingly unlikely ally in this quest in President Richard Nixon, who wanted to neutralize Wallace as a Presidential adversary in 1972. Wallace beat Brewer and returned as governor in January 1971, remaining in office for two consecutive terms. George Wallace won and served a fourth term 1983-1987.

Counting Lurleen Wallace's term as his surrogate, George Wallace had the remarkable achievement of winning five terms distributed over three decades to Alabama's governorship, totalling over seventeen years in office. It would have been twenty if Lurleen had served four full years instead of the 17 months she survived. This record is approached, but not matched, by the fourteen year tenure in consecutive terms attained by Governor James R. Thompson of Illinois.

Mrs. Wallace was remembered fondly by many as a loyal wife and a good mother. Among her major accomplishments during her brief tenure were major increases in expenditures for Mental Health including modernization of Partlow State Hospital for children and a big funding increase for State Parks. Lake Lurleen in central Alabama is named in her memory. George Wallace had two subsequent marriages, both ending in divorce.

Since Alabama was lacking adequate cancer treatment facilities at the time, Mrs. Wallace had to travel to the M. D. Anderson Cancer Center in Houston, Texas for diagnosis and treatment. This underscored the need for improved cancer care in the state. Following her death, the Lurleen Wallace Courage Crusade was spearheaded by her successor, Governor Albert Brewer, leading to fundraising for building a cancer center in Alabama. The University of Alabama Hospital at the University of Alabama at Birmingham was selected as the site for the cancer center, and a formal cancer center program was begun in 1970. Additional funds were received from the National Cancer Institute, and the center became one of the first eight NCI-designated Comprehensive Cancer Centers. Construction of the Lurleen B. Wallace Radiation Therapy and Tumor Institute at UAB was begun in 1974 and completed in 1976. The Lurleen B. Wallace Tower, an 80-bed inpatient facility at University Hospital, was built in her honor in 1979.