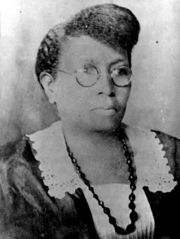 Carrie, the daughter of a Mohawk chief and a former slave, married John Tuggle in Eufaula. The couple had four children before relocating the family to Montgomery, and then to Birmingham around 1898. She found employment as a welfare officer. Through her efforts a separate Jefferson County Juvenile and Domestic Court was created. She also determined to found an orphanage for young black children. She opened Tuggle Institute, a combined residence and school, on September 3, 1903. She served as headmistress until her death in 1924. She was buried under a limestone marker on the school campus.

The institute was well-regarded and was made part of Birmingham City Schools in 1926. The present Tuggle Elementary School is the continuation of her early efforts.

Tuggle, a noted leader in the Courts of Calanthe organization, also founded the Rising Sons and Daughters of Protection.