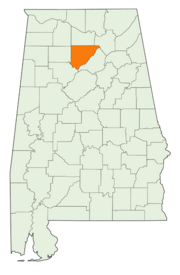 Cullman County is a county in the Birmingham metropolitan area. The county was created January 24, 1877 by the Alabama Legislature from portions of Blount, Morgan, Walker and Winston counties. Its name honors John Cullmann, who just a few years earlier had founded the city of Cullman, which serves as county seat.

The area that is now Cullman County was sparsely inhabited by indigenous people before white settlers began arriving from Georgia in the early 19th century. After the territory was formally ceded to the United States in 1814 it remained sparsely settled due to difficulty of utilizing the uneven terrain for plantation agriculture. During the Civil War it served as a haven for Unionists and deserters. A series of skirmishes between the forces of Confederate General Nathan Bedford Forrest and Union Colonel Abel Streight took place in April 1863.

After the arrival of John Cullmann in 1873, the area was promoted widely as a center for resettlement of German immigrants who left their homes following the Revolution of 1848 and the Dano-Prussian War. With the support of the Louisville & Nashville Railroad Cullmann was able to offer land to new settlers at very little cost. Despite resentment from some of the earlier settlers, the colony was successful and led to the creation of the new county in 1877. The settlers' small family-run farms prospered and the region thrived as an agricultural center.

There were 30,706 households out of which 32.1% had children under the age of 18 living with them, 60.8% were married couples living together, 8.7% had a female householder with no husband present, and 26.8% were non-families. 24% of all households were made up of individuals and 10.4% had someone living alone who was 65 years of age or older. The average household size was 2.49 and the average family size was 2.94.