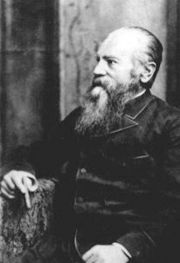 John Gottfried Cullmann (born July 2, 1823 in Frankweiler, Bavaria; died December 3, 1895 in Cullman) was a businessman and political activist who founded the city of Cullman and recruited thousands of settlers, many German-speaking immigrants, to the area.

Cullmann was the son of a geometer and schoolmaster in Frankweiler. He was enrolled at the polytechnic institute in Zweibrücken at the age of 13 and completed an engineering degree. He married Josephine Low, a banker's daughter, and settled in Neustadt an der Haard where he operated his own export business.

During the Revolution of 1848, Cullmann was politically involved with the revolutionary cause. After the Bavarian crown put down the rebellion, his wealth and business were lost. He rebuilt his business, but again lost his assets in speculation during the Dano-Prussian War. He made plans to emigrate to the United States, first settling in London to wait for the outcome of the U. S. Civil War. His wife and four children remained with her family in Zweibrücken.

By the end of 1865 Cullmann had made his way to New York. He continued on to Philadelphia and Cincinatti and began contemplating the idea of establishing a colony for German expatriates. He worked in a bookbindery in Cincinnati and studied law. Soon he was admitted to practice in Cincinnati and began seeking a locale for a suitable colony. He corresponded with Alabama governor Robert Patton, who put him in contact with the Louisville and Nashville Railroad, which had just taken control of the South & North Railroad extending its own Nashville & Decatur line as far as Montgomery.

Cullmann's 1872 deal with the railroad gave him control over a tract of 349,000 acres, stretching 15 miles in either direction along 18 miles of track. The railroad gave him the title of "Colonel" to reflect his status as agent. With 15 families from Cincinnati, Cullmann established a small settlement, the present city of Cullman, along the railroad in 1873. He began promoting the colony and the availability of farmland to other immigrants and potential immigrants by giving lectures in various cities and advertising in German-language newspapers. Over the years he brought perhaps 20,000 people into the area to settle.

Some of the previous settlers in the area, primarily from Georgia, resented the newcomers and Cullmann received a lifelong scar on his head from an assailant's knife.

Cullmann survived the attempt and prospered as the leader of the town of Cullman, which he incorporated in 1878. He founded the Cullman Savings Bank and published a bilingual newspaper, Der Nord Alabama Colonist. He died in 1895 from pneumonia. He is buried alongside his son, Otto, in the Cullman City Cemetery. He was inducted into the Alabama Business Hall of Fame in 1987.