Don Buel Schuyler (born March 16, 1888 in Englewood, Kansas; died June 26, 1972 in Tuscaloosa) was a noted architect based in Tuscaloosa that was an apprentice to Frank Lloyd Wright.

Schuyler was raised in Kansas and attended Fairmount College (now Wichita State University) and later attended the University of Illinois at Urbana–Champaign where he graduated in 1916 with his degree in architecture. After graduation, he briefly practiced in Chicago before he entered an apprenticeship with Wright at his Taliesin in Spring Garden, Wisconsin. During his time at Taliesin, Schuyler assisted Wright in the design the Henry J. Allen House located in Wichita, Kansas. From Taliesin, Schuyler moved to Wichita where he was a practicing architect designing homes, public and religious buildings in the area for nearly ten years. In 1926, he moved to Mobile where he practiced at the office of George B. Rodgers before he relocated to Tuscaloosa in 1936.

In Tuscaloosa, Schuyler opened his practice in the First National Bank building downtown. He practiced in Tuscaloosa from 1936 to 1964 and designed many structures throughout the community. His most famous building is the former Queen City Pool and Pool House designed in the art deco style and included on the National Register of Historic Places. Schuyler was a member of the American Institute of Architects, the Alabama Association of Architects, Tau Beta Phi and Rotary International. 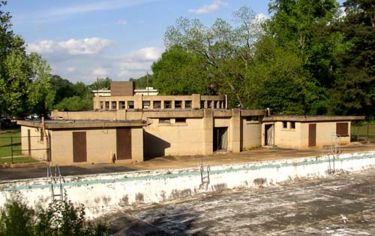