The Downtown Farmers Market was a farmers market that operated from space beneath the Elton B. Stephens Expressway between 1st Avenue and 2nd Avenue North in the 1980s and early 1990s. 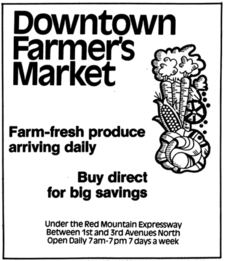 1985 advertisement from the Magic City News.

The market was planned and developed by Operation New Birmingham and the Downtown Action Committee as a means of boosting retail traffic downtown and enlivening an otherwise empty space. The land was leased from the Alabama Highway Department and farmers were charged rent by the day to set up market stalls. Organizers commissioned brightly-colored banners to advertise and define the market area.