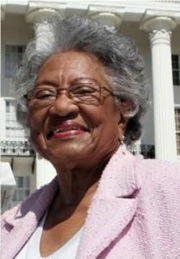 Ethel H. Hall (born c. 1928 in Decatur; died November 12, 2011 in Birmingham) was a teacher at Westfield High School, the University of Montevallo, and the University of Alabama, and a long-time member of the Alabama Board of Education.

She taught English at Westfield for 12 years before being hired by the Jefferson County Committee for Economic Opportunity to counsel high school dropouts. She became the JCCEO's director and led the Neighborhood Youth Corps program. She then was hired as Montevallo's first African-American faculty member. She taught there for 7 and a half years before joining the University of Alabama's social work faculty. She retired in 1999 and was named a professor emeritus.

Hall was elected to the Alabama Board of Education in 1986 and became its vice-president, presiding over meetings in the absence of the Governor of Alabama, in 2000. She helped realize the Alabama Reading Initiative and the First Choice Initiative in the state's public schools. She had planned to sit out the 2006 election when her husband, Alfred took ill, but was convinced by friends to remain for a sixth and final term. She was succeeded by Yvette Richardson.

Hall served on the boards of directors of the Birmingham Civil Rights Institute, the Birmingham Museum of Art, and the Alabama Archives and History Foundation. She was also appointed to the Governor’s Commission on Instructional Improvement and Academic Excellence, the Education Commission of the States, and the National Commission on Teaching and America’s Future. She served as deaconess, trustee, teacher, and assistant Sunday school superintendent for 2nd Avenue Beulah Baptist Church. She was also a member of the 1990 class of Leadership Birmingham and the 1993 class of Leadership Alabama.