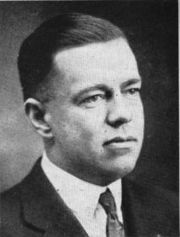 Frank Park Samford Sr (born November 1, 1893 in Troy, Pike County; died 1973) was the president and chairman of the Liberty National Life Insurance Company and the namesake of Samford University.

Samford was the son of Judge William H. Samford and grandson of former Governor of Alabama William J. Samford. He graduated from Alabama Polytechnic Institute in 1914 and began his career with the Manhattan Life Insurance Company of New York. He was appointed as Alabama's Deputy Insurance Commissioner in 1915.

Samford married the former Hattie Mae Noland in 1919 and had two children, Frank Jr and Ann. In 1921 he joined Liberty National as Secretary-Treasurer of the company. He was promoted to Vice President in 1932, to President in 1934, and was elected Chairman of the Board in 1960.

As a trustee for Howard College, Samford was a leader in efforts to relocate the campus from East Lake to a larger site in Shades Valley. In honor of his three decades of service to the college as chair of its board of trustees, it was renamed in his honor when it became a university in 1965.

Samford served as a deacon at Birmingham's Southside Baptist Church.