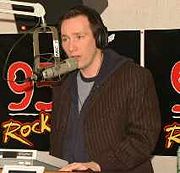 Guy Patton, also known as Beaner, is known in Birmingham as half of the Beaner & Ken radio show. Patton was born in Philadelphia, Pennsylvania, but grew up in Florida, attending the University of North Florida in Jacksonville as a pre-law student before turning to radio professionally. He worked in Jacksonville, Washington DC and Miami before coming to Birmingham.

While living in Birmingham, Patton was a member of the Board of Directors for the Greater Birmingham Humane Society. During the convoluted course of the "Beaner and Ken" show, which began in April 1998 at WRAX-FM, Patton moved first to New Jersey, then to Syracuse, New York. He and partner Ken Heron used ISDN lines to collaborate while living in different cities. WAQX in Syracuse became the show's home station.

Patton currently resides, with his wife, Dana, in Jersey City, New Jersey. He has worked as a radio producer and comedy writer for various productions, including the Upright Citizens Brigade and the Onion News Network. He is currently a stay-at-home dad. He wrote, produced and directed an action feature, "Pearl: The Assassin," in which his wife stars as a crime victim seeking revenge.