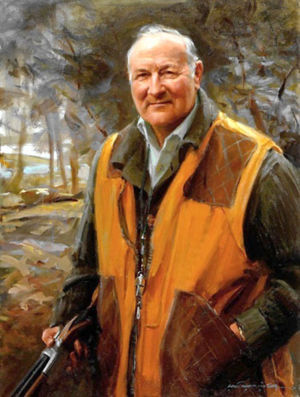 Harbert was born in Greenville, Mississippi to John M. Harbert, Jr and Mae Schooling Harbert. He enrolled in civil engineering at Auburn University, but was drafted just before he completed his degree in 1942. He served four years in the U.S. Army (infantry) during World War II and returned to school, graduating in 1946. He became a licensed surveyor and engineer, and using winnings from dice games on his troop ship, he bought a concrete mixer and founded his own construction company, the Harbert Corporation. The firm was incorporated with his brother, B. L. Harbert and two engineers as partners, in 1949. Harbert's first major project was a five-span bridge, partly built with war surplus, that still stands in Autauga County.

In 1969 Harbert began buying coal leases in Kentucky, eventually investing more than $150 million for the mining rights to 240,000 acres. In 1981 he sold his coal interests to Standard Oil. Two years later he joined T. Boone Pickens in a failed bid to take over the Gulf Oil Corporation. In 1989 his firm partnered with AmSouth Bank to construct the AmSouth-Harbert Plaza downtown.

Since those early days, Harbert expanded and diversified into a worldwide concern with mining, pipeline development, electrical generating, land development, limestone quarrying, building and road construction projects on five continents and 2006 assets of over $4 billion.

Harbert also founded the Florida Gas Company and has served on the boards of directors of American Cast Iron Pipe Company, First National Bank of Birmingham, Avondale Mills, Houston Natural Gas Corporation, Saint Joe Natural Gas Company, and the Engert Corporation. He also chaired the Governor's Energy Advisory Committee from 1973 to 1977 and, since 1978, served on the State Alcoholic Beverage Control Board.

His charitable directorships included the vestry of Saint Mary's-on-the-Highlands Episcopal Church, the YWCA, the Birmingham Area Council of the Boy Scouts of America, the Mineral Resources Insititute advisory board, the National Coal Reserve Committee, the National Council of the Salk Institute, the trustees of the Eye Foundation, the Birmingham Art Association, the Birmingham Museum of Art, and the Royal Society of Arts in London. His social memberships included the Rotary Club, Kiwanis Club of Birmingham, The Club, Inc. and the Riverchase Country Club.

In cooperation with the Equitable Life Insurance Company he helped plan and develop Riverchase.

Harbert was married to the former Marguerite Jones. The couple had three children, John M. Harbert IV, Raymond, and Margie.

Harbert was a noted philanthropist, with numerous contributions to projects in Alabama, particularly to Auburn, where the Harbert Engineering Center is named in his honor, and to Birmingham-Southern College, where a building bears his wife's name. A lengthy section of Interstate 459 is named for Harbert. For fourteen years Harbert employed dozens of young people each summer to collect litter on the sides of interstates near Birmingham.

Harbert worked with Hall Thompson to develop the Harbert Center, an office and meeting facility for civic clubs. He also established the Harbert Writing Center at the University of Montevallo.

Some of his awards include the "Marketing Man of the Year in Alabama" (1967), the Erskine Ramsey Award (1976), an honorary Doctor of Laws from Montevallo (1978), and other recognitions from various professional groups, including the Alabama Academy of Honor and the Alabama Business Hall of Fame. A portrait statue of Harbert sculpted by Brad Morton was placed in the covered entrance facing 20th Street as part of the Alabama-Mississippi Chapter of the National Multiple Sclerosis Society's "Legacy of Leadership" series in 1998.

Harbert is said to be one of the figures used in the composite character of Charlie Croker in Tom Wolfe's 1998 novel, A Man in Full. Croker's Georgia quail plantation closely resembles Harbert's 10,000-acre "Pinebloom".

After Harbert's death, a dispute arose between two of his children, Raymond and Marguerite, over loans made by Harbert Construction to launch the Harbert Management Corporation. The dispute was settled out of court in Febraury 2010.