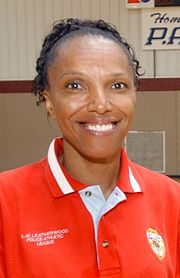 She competed for the United States in the 1984 Summer Olympics in Los Angeles, California in the 4 x 400 metres where she won the gold medal with her teammates Sherri Howard, Valerie Brisco-Hooks and Chandra Cheesborough. She traveled to the 1988 Olympic games in Seoul, South Korea, but her place on the 4x400 relay team was taken by Florence Griffith-Joyner at the last minute.

Lillie graduated from Tuscaloosa County High School and attended the University of Alabama. In the 1986 NCAA Indoor Track and Field Championships Lillie captured the 400-meter title with a 1st-place finish in an indoor collegiate record-setting time of 51.23 seconds. She was also the National Champion in the 400-meter dash at the 1985 NCAA Indoor Track & Field Championships, with a time of 53.12 seconds. She was named Female Athlete of the Year by the Southeastern Conference in 1987.

Lillie became a member of Zeta Phi Beta Sorority in 1986 through the Iota Eta Chapter at the University of Alabama. On November 20, 1986 she married teammate and fellow Olympian Emmit King. Currently she is employed as an officer in the Tuscaloosa Police Department. An annual "Lillie Leatherwood 5K Run" raises money for the department's Police Athletic League program.