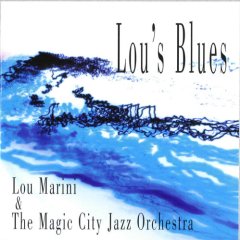 Marini graduated from Fairless High School in Navarre, Ohio. His father was the head band director at Fairless and created the school's Alma Mater. Each year, Fairless High still bestows the Lou Marini Award in honor of his father's work.

Following graduation from North Texas State University, Lou Jr. gigged as a professional musician and eventually became a member of Blood, Sweat and Tears. He was a member of the Saturday Night Live house band from 1975 to 1983 and appeared in the movie The Blues Brothers. He also played on Frank Zappa's 1977 album Zappa in New York, and has worked with a diverse range of artists such as Dionne Warwick, Deodato, Steely Dan and Aerosmith.

Marini is a music production partner of Birmingham jazz pianist and producer Ray Reach. His most recent recording with the Magic City Jazz Orchestra, titled "Lou's Blues," presents his original arrangements and compositions, many of which have become staple repertoire for the jazz Lab Bands at the University of North Texas.