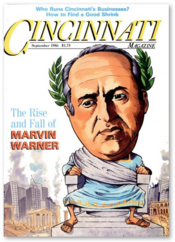 Caricature of Warner in 1986

Marvin Leon Warner (born June 8, 1919 in Birmingham - died April 8, 2002 in Cape Canaveral, Florida) was the United States Ambassador to Switzerland from 1977-79 and the owner of the Birmingham Stallions of the United States Football League during the league's existence from 1982-85. He was also a banker and breeder of thoroughbred horses.

Warner was born to Albert and Rose Randman Warner, both of whom worked for Rose's brother Philip Randman at his Bohemian Bakery on 4th Avenue North. He was raised on Birmingham's north side. He won a statewide contest in oratory in high school, earning a scholarship to the University of Alabama, where he earned degrees in business and law. He wrote for the Crimson & White, joined the Kappa Nu fraternity and befriended George Wallace.

After graduation he entered the US Army and served in the legal division of the War Department in Washington from 1941 to 1942. That year he married Jane Marie Blach, of the Blach's department store family. In the evenings he enrolled in classes at George Washington University and completed the requirements for a Master of Law before being sent to the Pacific theater. He left the service as a major and returned to Birmingham with Jane to work at a law firm.

Unhappy as an attorney, Warner took a job from his uncle, George Warner at his insurance firm. He was successful selling insurance policies and began looking to invest in real estate development. He and partner Joe Kanter flooded the post-war market developing apartments and housing tracts under the new National Housing Act. Because the wording of the act allowed developers to profit by delivering housing for below the estimated cost, Warner doggedly economized on construction.

With the Birmingham housing market near saturation Warner-Kanter sought new opportunities in the midwest. In 1951 Warner moved to Cincinnati and pursued a string of developments, including that city's "Forest Park" and "Highland Towers". He bought a savings and loan in order to be able to offer housing loans to his own buyers. His style was flamboyent and the projects he pursued were considered too risky by others in the real estate community. He made them work by pioneering more efficient construction methods and approving unprecedented loans, such as no-down-payment offerings for veterans.

His financial standing in the city led him to pursue political appointments as well. In 1967 his first marriage to Jane Marie Blach ended in divorce. In 1968 he was appointed to be a delegate to the 23rd General Assembly of the United Nations. In the 1970s he became chairman of the Ohio Board of Regents and a member of the Democratic National Committee. During the 1976 presidential race he was a leading fundraiser in Ohio for the Carter campaign. Carter rewarded him in 1977 by naming Warner the Ambassador to Switzerland. His appointment was opposed by the American Foreign Service Association as a blatant sinecure for his support of the Democratic party. He proved to be an aggressive diplomat, especially in promoting trade with the United States. He once parked two dozen American-made cars on the Embassy lawn as a kind of showroom display.

Warner held his Ambassadorial post for two years and remarried near the end of his term in 1979. That marriage, to the flashy Susan Goldwater, lasted less than a year, after which he quickly met and married 28-year-old lawyer Jody Piehowicz back in Ohio.

He briefly considered making a run for Governor of Ohio, but decided against it. Instead he poured money into sports ventures. He was one of a number of investors who joined with fellow Ohio Board of Regents member George Steinbrenner to purchase the New York Yankees in 1973 and later bought a 48% share of the Tampa Bay Buccaneers. He launched the Birmingham Stallions of the USFL in 1983. Meanwhile, his horse-breeding operation, Warnerton Farms enjoyed a great deal of success with thoroughbreds.

In addition to sports, Warner increased his Savings and Loan portfolio. His Home State Savings Bank, which he had founded in 1973, had over 30 branches by 1985 when the bottom fell out. Despite years of warnings about the exposure of secured deposits, Warner's bank had sunk $140 million of its funds into ESM Government Securities, a Florida company that traded in risky securities and went bankrupt in a fog of fraud. The failure prompted a run that led Ohio to declare a bank holiday while it bailed out its Deposit Guarantee Fund with tax monies.

1985 was the third season for the Stallions, which had grown to become a premiere team in the USFL, averaging over 32,000 fans per game and competing for the championship. When Warner's legal troubles became known, a number of local investors came forward to purchase his interest. The City of Birmingham also agreed to a $1 million loan to keep the Stallions afloat. Warner and Piehowicz retired to Florida.

Warner was ultimately convicted on six counts of fraud for making investments without board approval and three counts of securities violations. He was sentenced to 10 years, with all but 3 1/2 years suspended. After a series of failed appeals, he ended up serving less than 3 years (April 1991 to August 1993) at the Madison Correctional Center in Lebanon, Ohio. He also paid out $16 million in a settlement, down from the $22 million initially ordered by the court.

After his release from prison, Warner retired to a 150 acre farm in Ocala, Florida, living off money sheltered under Florida's homestead law, and was finally released from probation in 1997.

Warner died April 8, 2002 at the age of 82 in Cape Canaveral, where he had gone with a friend to watch the launch of the space shuttle Atlantis. He was survived by a son, Mark, and two daughters, all by his first wife who had died two weeks prior. He is interred at Lakeside Cemetery in Miami.