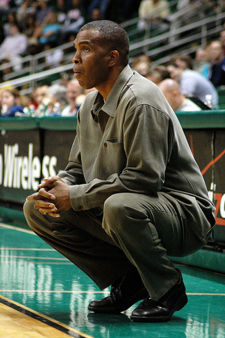 Mike Davis coaching the Blazers in 2005

Mike Davis (born September 15, 1960 in Fayette, Fayette County) is a former Alabama Crimson Tide basketball player. He later worked as an assistant coach at Miles College and the University of Alabama, and was head coach of the UAB Blazers men's basketball team from 2006 to 2012.

Davis was named an All-American at Fayette County High School and was the state's 1979 Mr Basketball. He accepted a scholarship to the University of Alabama and excelled as a scorer and defensive specialist under coaches C. M. Newton and Wimp Sanderson from 1979 to 1983. His 1,211 career points placed him in the top 25 on the Crimson Tide's all-time list and his 165 career steals placed him third in that all-time list. The team earned an 80-42 record during his playing career with two trips to the NCAA tournament and two to the NIT. Davis received the team's "Hustle Award" all four years.

Davis was drafted in the second round of the 1983 NBA draft by the Milwaukee Bucks. He played two seasons in Switzerland and Italy before returning to the US to play for the Topeka Sizzlers in the Continental Basketball Association.

After retiring from the court, Davis accepted a position as an assistant coach at Miles College (1989-90) and then coached the Venezuelan National Team for two years. He then coached the Wichita Falls Texans of the CBA for four seasons. When the Wichita Falls franchise relocated to Chicago, Davis went with them and resumed playing as a 35 year old. He averaged 8.3 points, 3.3 rebounds and 2.6 assists in 56 games for the Rockers. He also shot 80% from the free-throw line and finished fourth in "Defensive PLayer of the Year" voting for the entire league.

In 1994, Davis returned to Alabama as an assistant coach under David Hobbs for two seasons before taking the same position under Bobby Knight at Indiana. When Knight was fired in September 2000, the players led the campaign to have Davis take over the job. Indiana's 21 wins in Davis' first season were the most by any first year coach at the school. The Charlotte Observer named him their National Coach of the Year. In 2002 he took the Hoosiers to the title game of the NCAA tournament, getting a contract extension. By the time the 2003-04 season was coming to an end, with the first losing record at Indiana since 1970, that contract extension looked like a mistake to many Indiana supporters. In the face of relentless criticism, some of it with racial overtones, Davis made the decision to resign in February 2006.

Despite the contrast in their styles of coaching, Davis quickly emerged as a leading candidate for the UAB job when Mike Anderson left for Missouri. His hiring was announced on April 7, 2006. During the next week he hired Tracy Dildy, Kerry Rupp, and Donnie Marsh as assistants. He went on to become the first UAB coach to have consecutive 20-win seasons. His 122-73 overall record with the Blazers did not, however, lead to any NCAA tournament appearances. After going 15-16 in the 2011–12 season, UAB athletic director Brian Mackin terminated his contract.

He was hired by Texas Southern University in Houston that summer as the successor to Tony Harvey. In two seasons there, his Tigers teams have gone 36-28 overall with a 28-8 record in the Southwestern Athletic Conference.

Davis is married to the former Tamilya Floyd. The couple has a son, Antoine. Davis is also the father of Mike Davis, Jr and a daughter, Lateesha. He earned a Bachelor's in Communications from Thomas Edison College.