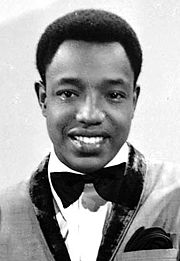 Williams is noted for being one of the founding members and original lead singer of the popular Motown group The Temptations. Along with David Ruffin, Otis Williams (no relation), and fellow Alabamians Eddie Kendrick and Melvin Franklin, Williams was a member of The Temptations during their most successful years in the 1960s, later dubbed the "Classic 5" period.

Paul Williams was born and raised in Birmingham and met his lifelong friend Eddie Kendrick during their grade school years. One story has it that the two first encountered each other in a fistfight after Williams dumped a bucket of mop water on Kendricks. Both boys had in common a love of singing, and sang in their church choir together. As teenagers, Williams, Kendricks, and their friends Kel Osbourne and Willie Waller performed in a secular singing group known as The Cavaliers, with dreams of making it big in the music industry. In 1957, Williams, Kendricks, and Osbourne left Birmingham for greener pastures, leaving Waller behind. Now known as The Primes, the trio moved to Cleveland, Ohio, and eventually found a manager in Milton Jenkins, who moved the group to Detroit, Michigan. Although The Primes never recorded, they were successful performers, and even launched a spin-off female group called "The Primettes", who later became "The Supremes".

In 1960, Kel Osbourne moved to California, and the Primes disbanded. Williams and Kendricks returned to Alabama, but soon found themselves back in Detroit again after learning that Otis Williams, head of a rival Detroit act known as "The Distants", had two openings in his group's lineup. Paul Williams and Kendricks joined Otis Williams, Melvin Franklin, and Elbridge Bryant to form "The Elgins", who signed to the Motown label in 1961, after first changing their name to The Temptations.

Although the group now had a record deal, Paul Williams and his bandmates endured a long series of failed singles before finally hitting the Billboard Top 20 in 1964 with "The Way You Do the Things You Do." More hits quickly followed, including "My Girl", "Ain't Too Proud to Beg," and "(I Know) I'm Losing You."

Williams sang lead on several of the group's songs, and served as lead singer during the group's early years. Later songs featuring his lead vocals included "No More Water in the Well", "Just Another Lonely Night", and his signature song, "Don't Look Back". His performance of "For Once in My Life," on the nationally-televised "TCB" (NBC, December 9, 1968) was considered by many critics to have stolen the show.

Considered the Temptations' best dancer, Williams also choreographed the group's dance routines, as well as those of the Supremes, before that role was assumed by Motown's Cholly Atkins, also a Birmingham native.

In 1965, Williams began an affair with Winnie Brown, hair stylist for the Supremes and a relative of Supremes member Florence Ballard. His marital troubles were paralleled by his diminished role as lead vocalist and choreographer with the Temptations. In 1969, Williams and Brown opened a celebrity fashion boutique in downtown Detroit. The business was not successful, and Williams soon found himself owing more than $80,000 in taxes.

At some point he became an alcoholic, and his health, already compromised by sickle-cell disease, declined sharply, leaving him occasionally unable to perform. His colleagues tried to intervene by pouring out his drinks and counseling him, but he refused to get medical attention. Richard Street, who had been a member of the Distants and was then lead singer for "The Monitors", was hired on to fill in for Williams on all but his signature songs. He usually sang from behind a curtain, but took the stage when Williams was too ill to even appear.

In April of 1971, Williams was finally persuaded to go see a doctor. The doctor found a spot on Williams' liver, and demanded that the singer retire from The Temptations. Williams left the group and Street became his permanent replacement. In support of helping Williams get back on his feet, The Temptations kept Williams on their payroll as an advisor and choreographer, and Williams continued to help the group with routines and dance moves for the next two years.

Now spending most of his time at home, Williams continued to be troubled by marital and financial problems, as well as his continued dependence on alcohol. He was reported to have mentioned suicidal thoughts to intimates.

By early 1973, Williams had returned to Motown's Hitsville USA recording studios, and was working on solo material. Eddie Kendricks, who had quit the Temptations just before Williams himself left, produced and co-wrote Williams' first single, "Feel Like Givin' Up", which was to have been issued on Motown's Gordy imprint along with "Once You Had a Heart". However, Motown decided to shelve the recordings, and the single was not released.

On August 17, 1973, Williams, age 34, was found dead from an apparent self-inflicted gunshot to the head. He was lying near his car in a deserted parking lot near 14th Street and West Grand Boulevard, not far from Hitsville studios. Though many people, including the Williams family, suspect that Williams did not take his own life, and despite some unusual circumstances recorded in the coroner's report, the death was ruled a suicide.

He was survived by his wife, Mary Williams, and their six children: Sarita, Paula, Kenneth, Mary Agnes, Paul Jr, and Paul Lucas. He is buried at Lincoln Memorial Park near Detroit. As a member of the Temptations, Williams was posthumously inducted into the Rock and Roll Hall of Fame in 1989 and the Vocal Group Hall of Fame in 1999. Both of his later solo recordings were eventually released by Motown on Temptations-related compilations.