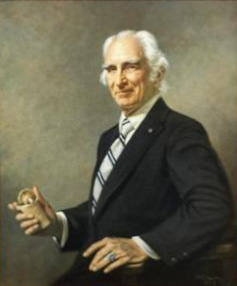 Richard Foster Howard (born 1902; died 1987) was the first director of the Birmingham Museum of Art.

Howard graduated from Harvard University in 1924 and performed post-graduate research there from 1927 to 1929. He accepted a three-year research fellowship at the Yale Institute of Human Relations in 1932 and was hired as the director of the Dallas Museum of Fine Arts in December 1935, just as the museum was preparing to open a new facility at Fair Park as part of the celebration of the Texas Centennial. As director, Howard organized the centennial exhibition and other shows, notably featuring African-American and Spanish artists. He also organized the museum's first education department and taught art history classes at Southern Methodist University.

Howard was also a member of the Army Reserve. He was summoned to duty in World War II in May 1942 and commissioned a Captain in the Field Artillery. He was promoted to Lieutenant Colonel of the 787th Field Artillery Battalion of the 9th Army before his unit joined the Ardennes and German campaigns. He was awarded the Silver Star for his service in Lemberg, France.

In 1946 Howard was assigned to succeed Major Bancel LaFarge as the Deputy Chief of the Monuments, Fine Arts, and Archives (MFAA) section, which had been tasked with preserving the cultural heritage of Europe at risk from Nazi policies of confiscating and destroying artwork. He oversaw collections points and the restitution of artwork from Germany until 1949. For his work with the MFAA, Howard received the Star of Italian Solidarity and was made an Officer of the Czechoslovakia Order of the White Lion.

Following his military service, Howard served briefly as Director of the Des Moines, Iowa Art Center. In February 1951 he accepted the first directorship of the Birmingham Museum of Art, which was soon to open in the newly-constructed Oscar Wells Memorial Building facing Woodrow Wilson Park.

Howard served as president of the Southwestern Conference of Museums in 1973-74. He retired in 1976. Howard and his wife, painter Helen Boswell, remained in Alabama. He died in 1987 and is buried at Arlington National Cemetery in Virginia.