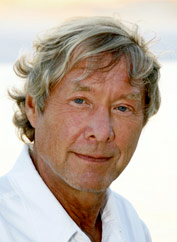 Richard North Patterson (born February 22, 1947 in Berkeley, California) is an attorney and novelist, with several well-received political thrillers to his name.

Born in California, Patterson grew up in suburban Cleveland, Ohio. He graduated from Ohio Wesleyan University in 1968 and went on to law school at Case Western Reserve. He worked as an Assistant Attorney General for the State of Ohio and as a liaison for the Securities and Exchange Commission to the Watergate special prosecutor.

While working in Birmingham for the firm of Berkowitz, Lefkowitz, Isom and Kushner he enrolled in a creative writing class taught by Eileen Montgomery at UAB. Encouraged by Montgomery's response to some of his pieces, he began to pursue writing seriously. In another class, taught by Jesse Hill Ford, who was UAB's writer in residence for 1977-78, he began expanding those first pieces into a novel. That book, The Lasko Tangent, was published by W. W. Norton in 1979. The novel won the 1980 Edgar Award for "Best First Mystery Novel (American)"

In 1993 his fifth novel, Degree of Guilt became a nationwide best-seller. He retired from active law practice and began to focus on writing full-time.

As of 2007 he has completed 15 novels, one of which awaits publication in 2008. His latest, Exile, explores the conflict between Israel and Palestine through a fictional criminal trial for a political assassin.

In addition to his writing, which he pursues with detailed dedication, Patterson volunteers 30 hours a month as the National Chairman of Common Cause, an open-government lobbying group. He and his wife, Nancy Clair, have five children. They currently split their time between houses in San Francisco and Martha's Vineyard.