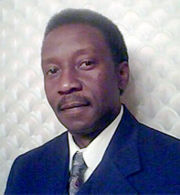 Walker is a graduate of West End High School and apprenticed for four years with Sheet Metal Local No. 48 before beginning his career with Brown Mechanical. He also has an associate's degree in paralegal studies from the Southern Junior College of Business. He has served as president of the Wahouma Neighborhood Association and vice-president of the South East Lake community advisory committee. Along with Gwen Webb, he was one of the leaders of the neighborhood protests against the owners of the Texaco Super Deli on Oporto-Madrid Boulevard in 2008.

In the 2013 race, Walker pledged to pursue stiffer ordinances holding owners accountable for deteriorating properties, to recruit businesses to his district, and to seek sources of revenue to support park and public safety improvements. Walker again challenged Austin in the 2017 Birmingham municipal election, pledging to be more "hands on" as a councilor.