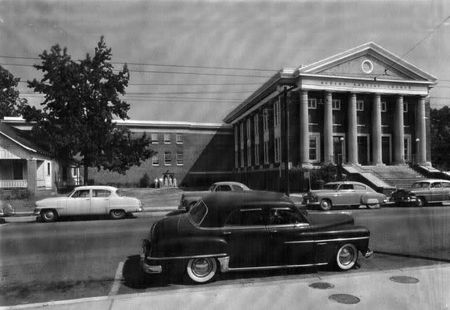 Ruhama was organized with Hosea Holcombe as pastor, on March 27, 1819, in a log cabin located where Division Avenue is crossed by 77th Street. It was named for the daughter of the prophet Hosea, translated as "mercy and compassion."

The nearby East Lake Cemetery was established in 1836. The church later moved to 7720 2nd Avenue South. The Ruhama Academy school , across the street, was redeveloped in 1887 as the new campus for Howard College, which moved from Marion, Perry County.

Ruhama dedicated a new sanctuary at 7901 2nd Avenue South under pastor J. C. Stivender on September 5, 1926. Ruhama's members included a number of faculty members and students from the college. Commencement ceremonies for Howard were held in the Ruhama sanctuary, and the church provided a stabilizing force for the college throughout its time in East Lake. The relationship between the two institutions changed when Howard College moved to its current campus on Lakeshore Drive in Homewood.

In the latter part of the 20th century, membership dwindled in the congregation from about 3000 in the 1970s. In December 2001, the congregation voted to merge with First Baptist Irondale. The Greater Emmanuel Temple Holiness Church began using Ruhama's former campus, and the records of the former church are now housed in the Special Collections Department of the Samford University Library.