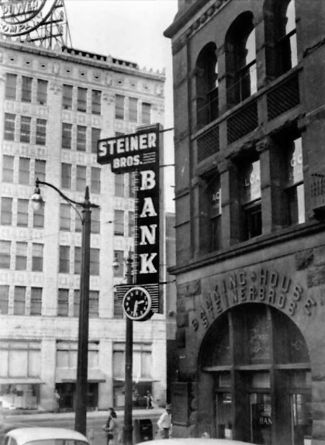 The Steiner Bank (originally Steiner Brothers Bank) was a family-owned banking office established by Sigfried and Burghard Steiner on May 1, 1888 in the Hewlett Block. Within two years, the bank moved into permanent quarters in its own Steiner Building, on the southeast corner of 21st Street and 1st Avenue North.

The newly-opened bank was involved in the issue of City of Birmingham municipal bonds, which the Steiner Brothers marketed across the region. When tax revenues dried up during the nationwide Panic of 1893, the Steiners developed a plan to buy enough time for passage of an amendment to the Alabama Constitution of 1876 to approve new revenues for the city to pay its debts. Sigfried, along with Judge A. C. Howze and Alderman James Meade, traveled to other cities to appeal directly to major bondholders to defer interest for five years. He personally bought securities from investors that remained unconvinced. Burghard led lobbying efforts for the amendment to increase property taxes in Birmingham to five mills, which he estimated would be just enough to service the bond debts. His proposal, dubbed the "Steiner Amendment," failed in a statewide referendum in 1896, but it passed in 1898, thus avoiding default and securing the city's credit for the future.

The founders' cousin, Leo Steiner, was associated with the firm from its founding and became president in 1901. His son, Bernard Steiner was president of the bank in the 1960s, when it had $4 million in assets.

On August 19, 1963 the bank reopened in their new, modern offices at 1920 3rd Avenue North. The 2-story 25 by 140-foot marble-faced building, designed by architect H. Lloyd Hill of Atlanta, Georgia, cost $300,000. The new layout included customer parking with access to a rear entrance.

The bank closed in 1994 when it was acquired by Highland Bank.