This article is about the sheriff. For the physician, see Walter P. McAdory. 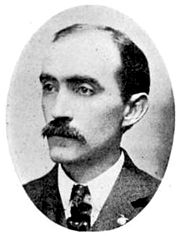 McAdory was the second son of Thomas James McAdory, Jr with his second wife, the former Jane Acre Kennon. He spent his youth on their farm in Jonesboro and went to school at the Pleasant Hill Academy and Red Mountain Academy.

In 1887 McAdory was employed as assistant Postmaster at the Bessemer Post Office. he resigned to become Bessemer's tax assessor and collector. In 1890 he opened a mercantile business and returned to his assistant postmaster duties in 1892. During the next four years he spent some time as acting postmaster and was also elected to the Bessemer Board of Aldermen, representing the 1st Ward.

On New Year's Day of 1890, McAdory married the former Daisey Crook. They had three sons and two daughters.

In 1897 McAdory resumed his mercantile business, but returned to public service again a year later when he was appointed clerk of the Jefferson County Circuit Court for a six-year term. 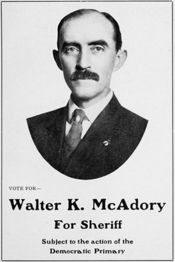 McAdory ran unsuccessfully for Sheriff of Jefferson County in 1909. He won the office over George Ward two years later and held the position for four years. In 1934 he served on the Alabama Confederate Pension Commission and in 1935 he was appointed the first Chief of the Alabama Highway Patrol by Governor Bibb Graves. He was succeeded by T. Weller Smith in 1939.

McAdory was active in several fraternal societies, including the Masons, Mystic Shriners, Knights of Pythias, Odd Fellows, Knights of Honor, Woodmen of the World, and Elks.