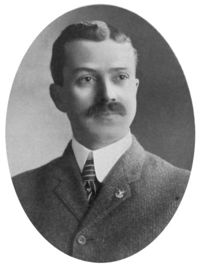 Elijah Lee Higdon (born September 25, 1861 in Archville, Polk County, Tennessee; died March 14, 1942 in Tuscaloosa) was a wholesale grocer and real estate broker and president of the Birmingham Home Investment Company. He served as a member of the Birmingham Board of Aldermen from 1888 to 1889 and as Jefferson County Sheriff from 1907 to 1911.

Higdon was the son of a Thomas Asbury Higdon, a Baptist preacher, and his wife Mollie. He attended common schools in Tennessee and high school in Dalton, Georgia. He began working as a clerk in an Atlanta produce shop at age 14 and eventually joined his employer, W. J. Hudson, as a partner in the wholesale fruit business. He brought the business to the corner of 20th Street North and Morris Avenue in Birmingham in 1884 and found success, adding James McCary as partner in 1886. In 1907 Higdon founded the Birmingham Mutual Savings, Loan & Building Association.

Higdon was elected to the Board of Aldermen in 1888. He resigned in late 1889 after purchasing a lot for a new home outside the city limits in East Lake.

Higdon was the commander of the Birmingham Rifles, the 1st Alabama Volunteer Infantry, organized in 1898. The company served in the Spanish-American War, mustering for duty on October 31 of that year. After their return, Higdon was presented with a silver berry bowl with gold inlay by his grateful enlisted men. In the ensuing years, Higdon led his militiamen in public drills and supported law enforcement activities in the area. He also served in the U. S. Guard, 4th Battalion, National Army during World War I.

Higdon was elected Sheriff in 1906 and served a four-year term. He testified that his office saw a marked decrease in crime and public drunkenness following passage of local prohibition in 1908.

Signs put up by Higdon

In 1921 Higdon founded the E. L. Higdon Concrete Company, which won a contract to erect markers on the Bankhead Highway from the Shelby County line to Leeds and Irondale. In 1928 he founded the Highway Advertising Company, performing a similar service to private companies.

Higdon and his wife, Alice had two sons, E. L. Jr and Percy. The family occupied a large residence at 6100 1st Avenue North in Woodlawn, and later built a gambrel-roofed stone house on 70th Street and Higdon Road above Cascade Plunge. That property was sold to James Becton who founded Hill Crest Hospital there in 1925.

Higdon died in 1942 in Tuscaloosa and is buried at Forest Hill Cemetery.