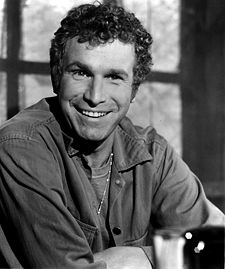 Rogers attended Ramsay High School in Birmingham, and is a graduate of the Webb School in Bell Buckle, Tennessee. He also graduated from Princeton University with a bachelor of arts in history in 1954, and served in the U. S. Navy before becoming an actor.

In the early 1960s, Rogers co-starred in the western TV series Stagecoach West in 1961. He also appeared in The F.B.I., Gunsmoke, and Gomer Pyle, U.S.M.C., and had a small role in the 1967 movie Cool Hand Luke. From 1972 to 1975 he co-starred with Alan Alda in the hit series M*A*S*H, set in a mobile army surgical hospital in South Korea during the Korean War.

He was expected at first to audition as Hawkeye Pierce, but found the character too cynical and asked instead to test as 'Trapper John', whose outlook was brighter. As conceived, Trapper and Hawkeye would have equal importance as characters. Alda's popularity, however, led the producers to feature Hawkeye more heavily.

After three seasons, Rogers grew weary of his character's demotion to sidekick and decided to leave the show. He was sued for breach of contract, but the case was dismissed when it was discovered that he never actually signed the contract over a disputed "morals clause". On the show, his character was replaced by B. J. Hunicutt (played by Mike Farrell). Pernell Roberts and Timothy Busfield later resurrected the Trapper John character in the spin off Trapper John, M.D. (1979-1986)

After M*A*S*H, Rogers starred in the 1979-1982 series House Calls with Lynn Redgrave, and made numerous guest appearances. He played civil rights attorney Morris Dees in the 1996 film Ghosts of Mississippi. He also has served as a director, screenwriter, producer and executive producer.

After retiring from acting, Rogers has had success as an investor, founding his own Wayne M. Rogers & Co. investment firm. He has appeared regularly as an analyst for the FOX News program "Cashin' In". He serves on the boards of directors for SandStar Family Entertainment, Stop-N-Save LLC, Kleinfeld, and Vishay Intertechnology, an Israeli electronics manufacturer.

He co-founded the Plaza Bank of Commerce in San Jose, California, and is marketing director for the Premier Community Bank of the Emerald Coast in Crestview, Florida. He has served as the national chairman of Easter Seals and has worked with the Juvenile Diabetes Foundation and the Arthritis Foundation.

Rogers died on December 31, 2015 from complications from pneumonia in Los Angeles, California, at the age of 82.