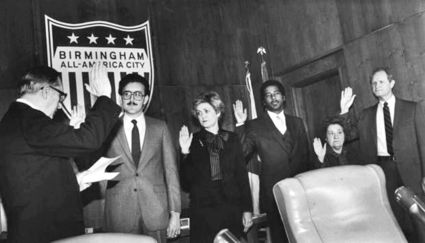 The 1981 Birmingham municipal election for the city of Birmingham was held on October 13, 1981 to elect five members to the Birmingham City Council. A runoff of the top ten finishers was held on November 3. The election came at the mid-point of Mayor Richard Arrington's first four-year term.

Until 1989, City Council seats were elected at large, with the top vote-getters winning four-year terms and the other winners receiving two-year terms. Five seats on the nine-member council thus came open every two years. Voting machines were programmed to accept only ballots with five candidates marked. Marking fewer than five would reject the ballot and marking more than five would jam the machine. It was estimated that 9% of the ballots cast in the October 13 primary were rejected because fewer than five names were marked. The neighborhoods with the most rejected ballots were Highland Park, Redmont Park and Forest Park-South Avondale, all predominantly white.

Among black voters, William Bell was the clear favorite, with 88.4% of votes cast in overwhelmingly black precincts. The white candidate with the highest percentage of black votes was Nina Miglionico, who appeared on 18.3% of ballots in those districts.

In predominantly white areas, Bill Myers was the overwhelming favorite, appearing on 86.2% of ballots. There was less "crossover" voting in white districts, with the top black candidate, William Bell, appearing on only 3.6% of ballots from white districts. In Southside, a more liberal area credited with helping propel Richard Arrington into office in 1979. The only black candidate to garner votes was Helen Shores Lee, who was not among the top ten overall.

Overall, more voters picked candidates of their own race in 1981 than in 1979. Of all candidates in the field, only Nina Miglionico relied on support from both black and white voters to make the runoff.