Abroms-Engel Institute for the Visual Arts 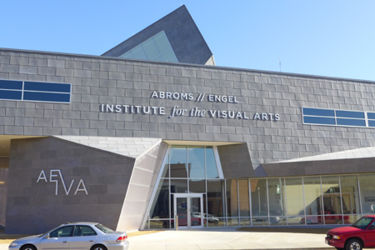 The Abroms-Engel Institute for the Visual Arts (AEIVA) is a 26,000 square-foot facility housing art galleries, lecture halls, classrooms and offices for the UAB Department of Art & Art History and storage, conservation and exhibition facilities for the University of Alabama at Birmingham's Permanent Art Collection. It was planned to take its place with the Birmingham Museum of Art and Space One Eleven as premier destinations for contemporary arts programming.

The institute was founded with major gifts from Judy and Hal Abroms and Ruth and Marvin Engel. The facility replaced the older UAB Visual Arts Gallery in the Humanities Building.

The architectural design of the two-story stand-along facility was commissioned from Los Angeles, California architect Randall Stout, a former associate of Frank Gehry. It uses a bold, contemporary style to complement the Alys Stephens Center to the north and to serve as a campus landmark to anchor the university's "arts district". The zinc-clad upper floor cantilevers over the brick-veneered base to form overhangs and covered entranceways. Stairways are wrapped with corrugated acrylic panels. An outdoor sculpture plaza, extending from the lobby, is situated to the southwest of the building and accommodates outdoor events, gatherings and performances.

Construction of the $12.5 million building, on the corner of 10th Avenue South and 13th Street, was approved in February 2011 by the University of Alabama Board of Trustees. Ground was broken for the facility on November 18, 2011, and it opened to the public on January 16, 2014. John Fields is collection curator and gallery director for the facility.

In late August 2014 the AEIVA building and adjacent Alys Stephens Center were draped with large fabric panels in an installation entitled "Magic Chromacity", which was designed by Brooklyn, New York-based artist Amanda Browder.

On March 15, 2019 Lili Anderson became the first executive director of Visual and Performing Arts after the administrative merger of the Alys Stephens Center and the Abroms-Engels Institute for Visual Arts.