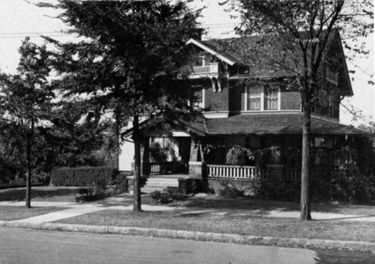 The Alexander Dearborn residence, from a 1923 publication

The Alexander Dearborn residence is a large home located at 1750 15th Avenue South, on the corner of 18th Street and in the Anderson Place Historic District of Southside. It was constructed in 1910 by developer and builder Alexander R. Dearborn, who moved from 2015 7th Avenue South. His partner, D. F. Evans, collaborated on the construction. Based on evidence of their friendship, the design of Dearborn's house has been attributed to Charles Wheelock.

The two-story house is topped by a large gable with a cross-gabled extension over a projecting center bay. The porch also has a central projecting gable over the front steps supported on stone piers. A shed-roofed veranda extends beyond the side of the house into a covered porch open on three sides.

Dearborn's daughter, Augusta was society editor for the Birmingham News and a close friend of author Margaret Mitchell. Mitchell came to Birmingham at Augusta's invitation in 1922, assisting with the News' society page and residing in the house's guest quarters. She married Red Upshaw that December and returned with him to Atlanta, where she joined the staff of the Atlanta Journal magazine.

The house was later subdivided into three apartments. It was bought out of foreclosure in 2014 and renovated as a single-family home.