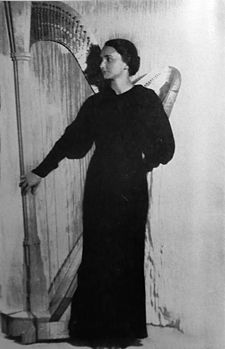 Alice Chalifoux (born January 22, 1908 in Birmingham; died July 31, 2008 in Winchester, Virginia) was a noted harpist and music educator. She was principal harpist with the Cleveland Orchestra from 1931 to 1974 and director of the Salzedo Summer Harp Colony from 1961 until her retirement.

She was the youngest of four children born to merchant and violinist Oliver Chalifoux and his wife, harpist Alice Hallé Chalifoux in Birmingham. She learned to play piano from her mother, but struggled in school. She spent her fifth grade year boarding with the nuns of the Convent of Perpetual Adoration and, as she learned discipline, graduated to day-school only and was even able to skip a grade. By age fifteen she resolved to pursue harp playing as a profession. She transferred to a school nearer the family's house so she could spend more time practicing.

In 1926 she was ready to continue her studies. She was sent first to Chicago, but found the level of instruction wanting, and, that fall, enrolled at the Curtis Institute of Music in Philadelphia, Pennsylvania where she could train under Carlos Salzedo. Her progress was slowed by having to relearn with a different technique, but she eventually qualified for a scholarship and, upon graduation in 1931, won a contract as principal harpist for the Cleveland Symphony Orchestra, its first female member, and a faculty position as head of the harp department of the Cleveland Institute of Music. She struggled with the demands of playing in orchestral settings and benefitted from additional instruction at Salzedo's Summer Harp Colony, in Camden, Maine.

She was soon recognized as a virtuoso in the classical technique and remained with the orchestra for forty-three years, under the direction of such legendary conductors as Erich Leinsdorf, Artur Rodzinski, George Szell, Pierre Boulez, and Loren Maazel. Her later recording of the Debussy Danses sacrée et profane as a guest soloist with the Cleveland Orchestra received a Grammy Award in 1996.

Chalifoux was known as a strong advocate of the method for the harp developed by Salzedo, but she also earned a reputation as a teacher in her own right through her many years spent teaching at the Cleveland Institute of Music, the Oberlin Conservatory of Music and the Baldwin-Wallace Conservatory of Music. Salzedo made her a primary instructor at the Summer Harp Colony, and she succeeded him as director of the school after his death in 1961. Her students continue to hold posts with major orchestras. In 1988 she appeared on the Tonight Show with Johnny Carson, introducing a performance by five of her students.

Chalifoux married industrial designer John Gordon Rideout in 1937. He created the Cleveland subdivision of Moreland Hills where the couple resided. He died in 1951 of hypertension, leaving one daughter, Alyce, who also took up the harp.

Chalifoux was a resident at the Blue Ridge Hospice in Winchester, Virginia when she died at the age of 100. She was survived by her daughters Alyce Rideout and Jeanne Chalifoux. A memorial service was held in Cleveland.