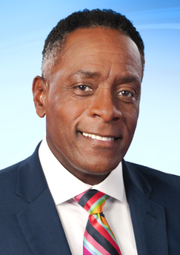 Franklin graduated from the University of Michigan. He worked for WILX in Lansing and anchored news and sports on WDZZ-FM in Flint before joining WAVY in Norfolk, Virginia as a a military affairs correspondent. He came to Birmingham in 1991 as a reporter for WBRC 6, and was promoted to news anchor there.

While at WBRC Franklin covered the trials of Thomas Blanton and Bobby Frank Cherry for the 1963 bombing of 16th Street Baptist Church. He also traveled to Washington D.C. to cover the impeachment of President Bill Clinton and to New York in the wake of the September 11, 2001 terrorist attacks.

Franklin's documentary "Kids and Violence: Saving a Generation" won an Emmy and a Scripps Howard Award. He also produced "Chosen One: The Fred Shuttlesworth Story" for WBRC. As an advocate for alternatives to violence, Franklin headed U-Turn, an anti-gang initiative and coordinated the Fox 6 Kids and Jobs summer employment program. In 1993 Mayor Richard Arrington appointed him to chair the newly-created Birmingham Youth Advisory Commission. When Franklin decided not to renew his contract with WBRC, which ran through May 30, 2003, there were rumors that he planned to enter politics, perhaps making a run for Mayor of Birmingham.

Instead, Franklin moved to Atlanta, Georgia where he ran a record label. He moved on to do television work in New York and Miami before returning to Atlanta to work for WXIA. He anchored weekend news broadcasts for WAGA from 2005 to 2008. In 2010 he returned to the public eye as a spokesman for Eddie Long, pastor of New Birth Missionary Baptist Church in Atlanta, who was accused of sexual abuse.

In 2016 Franklin returned to Birmingham and joined WIAT as a morning news anchor.

In 2021 Franklin launched an Art Franklin Collection of men's dress clothes in collaboration with Atlanta, Georgia-based fashion designer Edmond Newton and retailer Treś Washington of Treś’ Fine Clothing. He also opened an office and studio for the venture at the Cotton's Building, owned by Washington.

When his contract finished on April 29, 2022 he retired from television to focus on his other business interests.