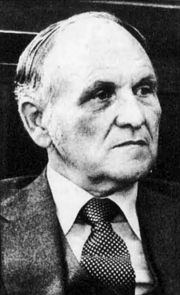 Arthur C. Jazwinski (born September 10, 1926 in New York, New York; died January 20, 2001 in Birmingham) was the head of the Birmingham Traffic Engineering Department in the 1980s.

Jazwinski served in the U.S. Navy and worked for 25 years for the New York Traffic Department before coming to Birmingham, and had served as president of the Metropolitan New York and New Jersey Section of the Institute of Transportation Engineers in 1977.

He and his wife Stella had three children, Karen, Sharon and Michael.

Jazwinsky died in January 2001 and is buried in the Garden of the Good Shepherd at Jefferson Memorial Gardens in Trussville.