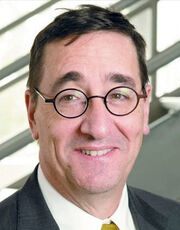 Arthur J. Tipton is the former president and CEO of Southern Research.

Tipton graduated from John Carroll Catholic High School in Birmingham and went on to earn his bachelor of science in chemistry at Spring Hill College in Mobile in 1980. In 1988 he completed a Ph.D. in polymer science at the University of Massachusetts Amherst. He took a job at Atrix Laboratories in Denver, Colorado, as a senior polymer chemist and manager of polymer science. He returned to Alabama in 1993 to become a vice president at Southern BioSystems and Birmingham Polymers, which were acquired by the Durect Corporation of Denver, Colorado in 2001. Tipton remained with Durect as an executive vice president.

In 2005 Tipton founded Brookwood Pharmaceuticals, a for-profit spinoff of Southern Research's drug development division. The company was acquired by SurModics in August 2007 and by Evonik in November 2011. He continued to serve Evonik as a senior vice president and head of global drug delivery.

Tipton became president and CEO of Southern Research on July 1, 2013. As the holder of more than 40 patents, he was inducted that year as a fellow of the National Academy of Inventors.

In 2018 Tipton was presented with the "Lifetime Achievement in Innovation" award from the Economic Development Partnership of Alabama.

Tipton has also served on the Board of Trustees of Tuskegee University and on the advisory boards of the UAB Collat School of Business and the UAB School of Engineering.

Tipton resigned from Southern Research in May 2019.