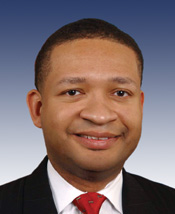 Artur Genestre Davis (born October 9, 1967 in West Montgomery) is an attorney, executive director of Legal Services Alabama and former U.S. Congressman who represented the 7th District of Alabama from 2003 to 2011.

As a law student, Davis worked for Senator Howell Heflin for a year, then returned to Montgomery where he clerked for U.S. District Court Judge Myron Thompson and worked on civil rights cases with the Southern Poverty Law Center. After earning his law degree, he joined the office of the United States Attorney in Montgomery, compiling a 98% conviction rate in the federal courts as an Assistant U.S. Attorney from 1994 to 1998. He left to go into private practice, joining the Birmingham firm of Johnston Barton Proctor & Powell.

Davis ran against Earl Hilliard in the 2000 Democratic primary to represent the 7th District, created as a majority-black district under the Voting Rights Act, including the rural Black Belt area as well as portions of Birmingham and Tuscaloosa. He lost his challenge by a narrow margin. In the 2002 election, however, he won by a similarly narrow margin. Hilliard's defeat came as a blow to the once-dominant Jefferson County Citizens Coalition and was credited, in part, to Hilliard's alienating Jewish voters with trips to Libya and non-support for pro-Israel congressional resolutions.

Davis was a member of the Congressional Black Caucus. Known as a centrist bipartisan legislator, he earned praise from publications such as Roll Call and the National Journal. Davis was appointed the Senior Whip Team for the Democratic Caucus of the 109th Congress and was the Co-Chair of the centrist New Democrat Coalition, as well as the Southern Regional Co-Chair for the Democratic Congressional Campaign Committee.

Seen as a rising star, Davis announced in May 2005 that he would like to run for a seat in the United States Senate or for Governor of Alabama. After the 2006 general election, in which he was unopposed, Davis showed early interest in challenging Jeff Sessions for his Senate seat in 2008, but instead put his energy into chairing the Alabama campaign for Democratic presidential candidate Barack Obama. He delivered a nominating speech at the 2008 Democratic National Convention in Denver, Colorado, in which he formally seconded the motion to name Obama the party's candidate for president.

Following the presidential inauguration, Davis announced his candidacy for Governor in the 2010 election. His platform focused on economic development and access to education. He won the endorsement of Peggy Wallace Kennedy, daughter of George Wallace, but did not seek endorsements from the New South Coalition or the Alabama Democratic Conference. His vote against the health care bill passed in Congress was widely seen as a move calculated to improve his chances in the general election at the expense of the welfare of his core constituents in the 7th District. In the primary, Ron Sparks outpolled him in his own district and among African-Americans statewide, securing the nomination with 62% of Democratic ballots.

After the defeat, Davis announced that he would no longer seek any political office or appointment. Davis resides in Birmingham. He was made a partner in the Washington D. C. office of SNR Denton in 2011. In May 2012 he left the Democratic Party and campaigned for Republican presidential candidate Mitt Romney. He delivered another convention speech, this time at the Republican National Convention in Tampa, Florida.

In 2015 Davis ran unsuccessfully for Mayor of Montgomery. Later that year he filed to run for the Montgomery County Commission as a Democrat, but the Alabama Democratic Party rejected his request to rejoin the party, citing the "Radney Rule" which bars candidates who did not support the party in elections during the previous four years. Davis filed a lawsuit aimed at forcing the party to accept his application. He ended up running as an independent, finishing well behind Republican incumbent Todd Strange. He next considered running as a Democrat for a seat on the Montgomery County Commission.