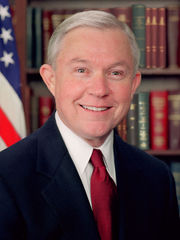 Jefferson Beauregard Sessions III (born December 24, 1946 in Selma, Dallas County) is a former United States Attorney General, and U.S. Senator from Alabama. He previously served as U.S. Attorney for the Southern District of Alabama and Attorney General of Alabama. He was nominated in 1986 for a judicial seat on the U.S. District Court but the nomination was rejected by the U.S. Senate after testimony about incidents of Sessions' alleged racial biases.

Sessions was born in Selma to equipment dealer Jeffersons Sessions Jr and his wife, the former Abbie Powe. He attended primary school in Camden, Wilcox County and earned a bachelor of arts from Huntingdon College in Montgomery in 1969. In his senior year, Sessions was active in the college's Young Republicans organization and served as student body president. He married the former Mary Blackshear of Gadsden in 1969 and has three children: Mary, Ruth and Sam.

Sessions completed his juris doctorate at the University of Alabama School of Law in 1973. After passing the bar examination, Sessions began practicing in Russelville, and later in Mobile. He joined the U.S. Army Reserve and attained the rank of captain before retiring in 1986.

In 1975 Sessions began working as an assistant U.S. Attorney in the Southern District of Alabama. In 1981 he was nominated by President Ronald Reagan to succeed William Kimbrough Jr as head of that office. The nomination was confirmed by the U.S. Senate, and he remained the U.S. Attorney until being succeeded by Don Foster in 1993.

While in office in 1986, President Reagan nominated Sessions for a seat on the bench in the same District Court. The Senate held confirmation hearing during which they took testimony from four Justice Department attorneys who had worked with Sessions who all related times when he had used racist language or made remarks condemning federal Civil Rights protections. Questioned about whether he had said that he thought the Ku Klux Klan was "OK until I found out they smoked pot". Senator Joe Biden asked if he had ever called the NAACP and other civil rights organizations "un-American", he said that he may have said something to that effect, but meant no harm by it. Republican Senator from Alabama Jeremiah Denton, supported Sessions' nomination, but his colleague, Democrat Howell Heflin, came to doubt during the hearings that Sessions could be a "fair and impartial" federal judge. The Senate Judiciary Committee voted against recommending the nomination to the full Senate. Heflin and seven other Democrats were joined by Republicans Charles Mathias and Arlen Spector in the 10-8 vote. A second vote on whether to send the nomination to the full Senate with no recommendation failed on a 9-9 vote in which Spector sided with his fellow Republicans. The nomination was withdrawn on July 31.

In 1994 Sessions campaigned for the office of Attorney General of Alabama, and unseated incumbent Democrat Jimmy Evans in the general election. As Attorney General, Sessions authored an official opinion that, "an organization that professes to be comprised of homosexuals and/or lesbians may not receive state funding or use state-supported facilities to foster or promote those illegal, sexually deviate activities defined in the sodomy and sexual misconduct laws."

Two years later, when Heflin retired from the Senate, Sessions won the Republican primary for his vacant seat and defeated Democrat Roger Bedford in the general election. He went on to survive challenged by Susan Parker in 2002 and Vivian Figures in 2008. He ran unopposed for a fourth term in the 2014 general election.

During his years in the Senate, Sessions has served as the ranking Republican on the Judiciary Committee (succeeding Arlen Spector when he switched parties) and the Armed Forces Committee. He is currently the ranking Republican on the Senate Budget Committee, and also served on the Environment and Public Works Committee. He has generally sided with his party on all matters, and supported Bill Frist's "nuclear option" to change the Senate's rules to disallow Democratic filibusters of Bush's judicial nominations.

Sessions supported President George W. Bush's tax cuts in 2001 and 2003. He supported the administration's plans to invade Iraq and spoke out against anti-war demonstrators. He was one of nine senators who voted against an amendment added to a Senate bill to prohibit cruel, inhumane or degrading treatment of U.S. prisoners. He was one of only three senators who voted against a Senate bill which would increase funding for the VA medical system. Sessions sponsored the "HEROES Act" to increase the death benefit paid to families of service members killed in action, which was included in the Supplemental Appropriations Act of 2005.

Sessions has consistently opposed measures to open a "path to citizenship" for undocumented immigrants. He vocally opposed the Comprehensive Immigration Reform Act of 2007 and has supported construction of stronger barricades on the U.S.-Mexico border and the broader use of the federal "E-Verify" database system used by employers and government agencies to check individuals' immigration status. He has opposed calls to constrain the practice of "civil forfeiture" by law enforcement agencies.

Sessions is a staunch social conservative, consistently voting to against civil rights protections for homosexual and transgender citizens. He opposed the extension of "hate crime" protections to victims of crimes motivated by sexual orientation and voted against the repeal of the armed forces' "Don't Ask, Don't Tell" policy. Twice Sessions voted to advance proposals to amend the United States Constitutions in order to restrict marriages. With regard to the possibility of an openly gay justice being confirmed for a seat on the Supreme Court he indicated that he would not consider it to be a disqualification "per se", but that the American people may feel uneasy about such an appointment. Sessions pushed for more funding for rural health care in the Ryan White CARE Act which helps fund HIV/AIDS treatment.

Sessions opposes legal abortion and was one of 37 senators to vote against funding for embryonic stem cell research. He has also repeatedly signaled his opposition to relaxing federal restrictions on marijuana. Sessions mistrusts the scientific consensus on climate change and has voted consistently against environmental protections. He supported laws to prevent the U.S. Environmental Protection Agency from regulating greenhouse gas emissions and voted in favor of opening the Gulf of Mexico and the Arctic National Wildlife Refuge for petroleum extraction. On the other hand, Sessions helped pass legislation creating the Mountain Longleaf National Wildlife Refuge near Anniston and the Dugger Mountain Wilderness in the Talladega National Forest. He also recommended a White House working group to study the extent of mercury pollution in the Gulf of Mexico.

Sessions voted in favor of a 2008 budget amendment to put a moratorium on earmarking. In committee, he voted to advance the 2010 Combating Online Infringement and Counterfeits Act to enable courts to issue restraining orders against internet domains that were found to host unlicensed copyrighted materials. He authored the Paul Coverdell National Forensic Sciences Improvement Law of 2000 which sent more federal funding to state forensics laboratories.

During the presidency of Barack Obama, Sessions and his Republican senate colleagues earned a reputation as "obstructionists" for opposing all legislation and appointments proposed by the administration. He opposed the Emergency Economic Stabilization Act of 2008, (the "bank bailout") on the grounds that it was, "an affront to the principle of separation of powers." His opposition to the American Recovery and Reinvestment Act of 2009 (the "stimulus bill") was based on its size and scope. He voted against the Affordable Care Act that same year, and the Health Care and Education Reconciliation Act of 2010. He explained his vote against the 2011 American Jobs Act as a way of protecting the national debt.

Sessions also opposed three Supreme Court nominations made by President Obama. In hearings before the Judiciary Committee, he found fault with the qualifications of Sonia Sotomayor and Elena Kagen, both of whose nominations were approved by the Senate. After the death of Antonin Scalia in 2015 Sessions stood with Republican leadership that vowed not to consider anyone nominated by President Obama.

In 2013, Sessions complained about certain grants from the National Endowment for the Humanities, including some that were used to purchase books about Islam for public libraries. He cosponsored the re-authorization of funding for the provisions of the Victims of Child Abuse Act of 1990.

During his legislative career, Sessions has been recognized with high grades by the National Federation of Independent Business, the American Conservative Union, the Watchdogs of the Treasury, the National Taxpayers Union and the Alabama Farmers Federation. On the other hand, he earned a "0" rating from the Human Rights Campaign and a "7%" rating from the League of Conservation Voters. Major contributors to Sessions' senate campaigns have included Southern Company, Balch & Bingham, Harbert Management, Drummond Company and the UK-based WPP Group.

During the run-up to the 2016 general election, Sessions was one of a small number of Republican office holders who supported the candidacy of real-estate mogul and television celebrity Donald Trump. He endorsed Trump at a campaign rally in Madison on February 28, donning a red "Make America Great Again" baseball cap and explaining that, "the American people are not happy with their government."

Sessions served as a policy adviser to Trump's campaign and appeared at other rallies across the country. He also delivered a speech at the Republican National Convention in Cleveland, Ohio in which he promised that Trump would "kill Obamatrade" and "build the wall" on the Mexican border. Because of his experience, some saw Sessions as a likely candidate for Vice President. Trump instead tapped him for Attorney General of the United States on November 18. He was confirmed by his Senate colleagues on February 8.

During his confirmation hearings, Sessions was asked twice whether he had been in contact with Russian officials about the election, to which he answered "no." When it was revealed in early March that he had, in fact, had more than one meeting with Russian ambassador to the United States Sergey Kislyak during the campaign. He insisted that he had those meetings as a member of the Senate Armed Services Committee and did not discuss the election campaign, and therefore answered truthfully. Many of his former Congressional colleagues nevertheless called on him to resign, or at least to recuse himself from the ongoing investigation of Russian interference in the election.

Trump dismissed FBI director James Comey in May 2017. With Sessions under recusal, Assistant District Attorney Rod Rosenstein appointed Robert Mueller as a Special Counsel to investigate allegations of coordination between individuals associated with Trump's campaign and the government of Russia. According to former White House Chief of Staff Reince Priebus, the development prompted President Trump to chastise Sessions harshly, and Sessions offered to resign. Priebus intervened to keep Sessions in place then, and once more in July.

Trump asked Sessions to resign his post on November 7, 2018, the day after the midterm election. He was succeeded by acting Attorney General Matthew Whitaker.