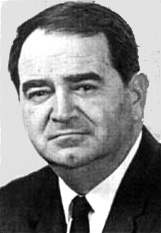 Asa Earl Carter (born September 4, 1925 in Anniston; died June 7, 1979 in Abilene, Texas) was a radio host and aspiring politician in Birmingham, the founder of an independent Ku Klux Klan group and the North Alabama Citizens Council, and the founder and editor of The Southerner monthly magazine. He worked as a speechwriter for George Wallace, and, later became a best-selling author, under the assumed identity of Forrest Carter.

Carter was the eldest of Ralph and Hermione Carter's four children and was raised on the family farm near Oxford, graduating from Calhoun County High School in 1943. He served in the Navy as a radioman in the Pacific during World War II and afterward married his high school sweetheart, the former India Thelma Walker.

Having been trained by the Navy in Boulder, Colorado, he returned to the University of Colorado there to study journalism. After graduating, he and India moved to Birmingham, where they raised their four children. Using the name Ace Carter, he worked at several radio stations before landing a hosting job at WILD-AM in 1953. His show, sponsored by the American State's Rights Association, was syndicated to more than twenty other stations. His denouncing National Brotherhood Week, provoked community outrage, led by National Conference of Christians and Jews Alabama chapter president Paul Head, that got Carter fired. Afterward he supported himself by running a filling station.

Marginalized by the Alabama Citizens Council for his anti-semitism, Carter founded his own North Alabama Citizens Council, and became an increasingly-outspoken defender of racial segregation. He told the UPI that the NAACP had "infiltrated" Southern white teenagers with rock and roll music and called for jukebox owners to remove black records.

By the mid-1950s, Carter had founded the gray-robed Ku Klux Klan of the Confederacy, an independent Klan group with paramilitary inclinations. It was members of that group that beat singer Nat "King" Cole at Municipal Auditorium on April 10, 1956. Four members of Carter's group were convicted of torturing and mutilating Edward "Judge" Aaron in 1957. He and Jessie Mabry also published The Southerner, which promulgated white racial superiority and anti-communist rhetoric.

On September 1, 1956 Carter gave a speech in Clinton, Tennessee, lambasting the desegregation of Clinton HIgh School. In the aftermath, a mob of white men damaged cars driven by African Americans and were turned away from the mayor's house by Sheriff's deputies. Fellow speaker John Kasper was charged with sedition and inciting a riot.

Carter, who was not personally present for those crimes, challenged the previously-ousted Bull Connor for the office of Police Commissioner in the 1956 Birmingham municipal election, but lost. In 1957 Connor's police arrested him and his brother James for assaulting officers who were investigating a shooting connected with Carter's KKK group. Carter left the group in 1958, but only after shooting two members in a dispute during a meeting at the Central Park Theatre on Bessemer Road. He was charged with attempted murder, but not prosecuted. That year he campaigned for Lieutenant Governor, finishing fifth in the five-man race which was won by Albert Boutwell.

During the 1960s, Carter worked as an uncredited speech writer for Governor George Wallace and, later, for his wife Lurleen. He is now credited with penning Wallace's infamous 1963 inaugural address in which he promised to uphold "Segregation now. Segregation tomorrow. Segregation forever." Wallace himself claimed not to know Carter, but former staffers say that he was paid by others on Wallace's behalf. When Wallace campaigned for President in 1968 and sought to tone down the fervor of his views, Carter was no longer involved with him.

Carter challenged Wallace for Governor in 1970 Democratic primary. Once again he finished last in a field of five, with Wallace winning narrowly over Albert Brewer. Carter and his supporters picketed the inauguration, carrying signs reading "Wallace is a bigot" and "Free our white children." 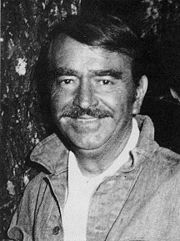 After his defeat, Carter sold his farm and moved to Sweetwater, Texas, and, in 1973, to St George's Island, Florida, where he busied himself with writing, using the assumed name of Bedford Forrest Carter.

His first novels, The Rebel Outlaw, Josey Wales and The Vengeance Trail of Josey Wales, feature a former Confederate soldier pursued by cruel federal soldiers. The first novel, originally issued privately by Covington County's Whippoorwill Publishers and later picked up by Delacorte Books, was purchased by Clint Eastwood's Malpaso Productions for $25,000 and made into a 1975 motion picture. Philip Kaufman, the original director, objected to what he considered "fascist" overtones in the script and dropped the project, which Eastwood himself eventually directed. When interviewed about the book by Barbara Walters for the "Today Show", Carter was recognized by many in Alabama as the same man who had just run unsuccessfully for governor a few years earlier. He denied being the same man in a follow-up interview for The New York Times.

He followed up with a purported memoir entitled The Education of Little Tree in 1976. While marketed as Forrest Carter's autobiography, the story was a fiction, portraying young Forrest as an orphan raised in the Cherokee culture by his grandparents. The story has been credited with introducing American readers to a gentler view of Native Americans and has been cited as an influence in screen depictions such as Kevin Costner's "Dances with Wolves".

The author bio on the back cover of Carter's Delacorte editions claimed that he was "Storyteller in Council" to the Cherokee Nation. Members of the Cherokee nation have disclaimed any connection with Carter and have found numerous inaccuracies regarding their culture and language as described in The Education of Little Tree. Critics and historians have lodged similar complaints, finding his depiction of Native Americans to be drawn from "noble savage" mythology and anti-establishment sentiment rather than from actual native practices and beliefs.

In 1978 Carter completed a fictionalized biography of Geronimo, entitled Watch for Me on the Mountain. Having separated from his wife, Carter moved to Abilene, Texas where he was working on a follow-up to The Education of Little Tree. He died in June 1979 under unclear circumstances. It is alleged that he was involved in a fistfight with one of his sons in Potosi, Texas and fell unconscious, choking on his own vomit. Other accounts have him dying of heart failure. His body was returned to Anniston for burial at the D'Armanville Cemetery. His family later replaced the original "Forrest Carter" headstone with one bearing his birth name.

The Education of Little Tree was re-released in a paperback edition by the University of New Mexico Press in 1985. With the controversy over its authorship forgotten, the book sold more than 600,000 copies. It was named "Book of the Year" by the American Booksellers and was ranked atop The New York Times non-fiction best-seller list for several weeks. When Emory University historian Dan T. Carter, published an article about Asa Carter's double life in the Times in 1991, the newspaper moved the book to its fiction list and the UNM Press reworked the cover, removing the claim that it was a true story. Oprah Winfrey, who had endorsed the book in 1994, removed it from her list of recommendations in 2007.

The Return of Josey Wales, based on Carter's follow-up to the Josey Wales story, was filmed in 1986. The Education of Little Tree was adapted into a feature length film by Richard Friedenberg in 1997, stoking renewed controversy about Carter. The original Delacorte editor, Eleanor Friede, characterized the connection as "nasty gossip".