This article is about the labor leader. For his son, an army veteran and activist, see Asbury Howard Jr. 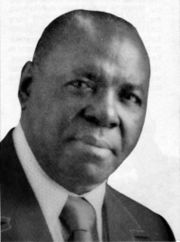 Howard's family moved to the Birmingham District during his youth. He began working at Muscoda as a "mucker" for TCI in 1924. He and his wife Mable had two children, Cleopatra and Asbury Jr.

In the early 1930s he joined the International Union of Mine, Mill and Smelter Workers (IUMMSW), quickly joining the leadership ranks in IUMMSW Local No. 123. The racially-integrated union led a labor strike in 1934 which was marked by continual violence. FBI investigators blamed Howard for provoking much of the fighting between strikers, scab workers, company-paid "security officers" and law enforcement.

After the strike, Howard and 150 other union members were fired by TCI. Howard appealed to the National Labor Relations Board and was awarded reinstatement with back pay. TCI recognized the IUMMSW as representing their workers in 1937. When the all-white CIO-affiliated United Steel Workers moved to replace the IUMMSW at TCI in 1952, Howard led a motorcade using a public address system to appeal directly to workers. The parade was stopped and surrounded by USW representatives, touching off a fierce gun battle in Jonesboro involving hundreds of armed men. The only casualty was John Howard, who was injured by buckshot. Asbury Howard was charged with disorderly conduct and assault with intent to murder. After posting bond, he toured union halls and left-wing groups around the country raising funds and interest to get the other union members freed. On that speaking tour Howard appealed for "financial and moral support," but urged outsiders not to agitate in the South, pledging that local black and white workers were rising up to fight Jim Crow and the Ku Klux Klan.

In the 1940s Howard left his job at the mine to work as a full time organizer. He and Claude Williams founded the Bessemer Voters' League, which held training sessions to prepare black applicants to pass the "understanding test" given by the Jefferson County Board of Registrars. Those efforts helped to build back the number of registered black voters in Bessemer from 75 to more than 2,000. He organized a march against the Bessemer Democratic Party's plans to close polls to non-whites. Howard joined the NAACP in 1942 and served as vice-president of its Bessemer branch until it was forced to disband in 1956. He campaigned on behalf of Franklin Roosevelt in 1944 and for Progressive Party candidate Henry Wallace in 1948.

In the post-war environment of anti-Communist paranoia, Howard's involvement with the Southern Negro Youth Congress and the Communist Party USA made him a target. Following passage of the Taft-Hartley Act, his union activities were also made suspect. Howard was charged with "conspiracy to file false non-communist affidavits" to the National Labor Relations Board in 1949. Those charges were dismissed by a federal judge in 1959. Howard was promoted to regional director in the IUMMSW in 1950 and was the first African American elected to the union's national leadership when he easily defeated a white candidate for eastern vice president in November 1953. He became the union's international vice president in 1963. Howard's home was targeted by bombers in April 1957. Investigators were unable to determine if the blast (which coincided with a similar attack at the nearby Allen Temple AME Church) was racially-motivated or related to his conflicts with the Steel Workers union.

Howard was also a devout Baptist, serving as clerk for Starlight Baptist Church and receiving publications from the Sunday School board alongside his communist party mailings.

In January 1959 Howard commissioned sign painter Albert McAllister to reproduce a political cartoon from the Kansas City Call which depicted a black man in chains praying for freedom in the form of a large poster which would bear the slogan "Vote Today For A Better Tomorrow". Before the work was completed, Howard and McAllister were arrested by Bessemer police and charged with "breach of the peace" on the theory that such an image was bound to incite violence. Immediately after his February 5 bond hearing, Howard was confronted by a gauntlet of about 40 white men lining the hallways of the Bessemer Courthouse and was badly beaten. His teenage son, Asbury Howard Jr, tried to help him and was charged with disorderly conduct. Both were sentenced to hard labor on a chain gang. Although the incident was widely publicized, Howard never filed a formal complaint or publicly identified any of the assailants.

In 1965 Howard organized the Federated Leadership Organization of Bessemer and Vicinity (FLO) which petitioned the Bessemer Chamber of Commerce and City Commission to undertake improvements for the benefit of black residents and workers. When those requests were ignored, the group organized pickets outside downtown stores like Pizitz, Loveman's and Sokol's on November 2. The boycott produced a few immediate changes in staffing and was considered successful. In 1966 Howard helped to negotiate a potential merger between the Mine-Mill union and their former rivals, the USW.

In 1967 Howard was appointed international representative of the USWA's Civil Rights department. He was elected to the Alabama State House of Representatives from Alabama House District 49 in 1974 and re-elected, to Alabama House District 41, in 1978 and 1982. As a statesman, Howard disavowed his earlier relationship with the Communist Party and his earlier use of violence in the struggle for political equality. He served on the House committees for agriculture, insurance, and local legislation.

Asbury Howard Street in Muscoda and the Bessemer Housing Authority's Asbury Howard Apartments are named in his honor.