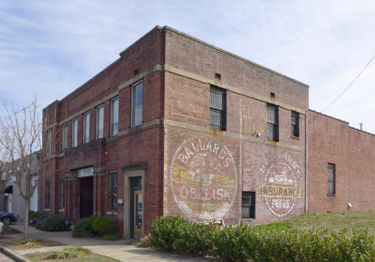 The Ballard & Ballard Co., Inc. was a Louisville, Kentucky-based miller of wheat flour, established in 1880. The company had a Birmingham branch office which moved from the 3rd floor of the First National Bank Building in downtown Birmingham to 2409 1st Avenue South in 1923.

The company manufactured and distributed "Ballard's Obelisk" flour as well as self-rising flour, biscuit flour, pancake flour and buckwheat flour. They also offered animal feed under their "Insurance" label. The office closed about 1937 and the company was acquired by Pillsbury in 1950, but the painted sign survived and was exposed during demolition of an adjacent building in 2005.

Another sign was painted on the License Commission Building in Tuscaloosa.