From Bhamwiki
(Redirected from Barker School)
Jump to: navigation, search

Barker Elementary School was a Birmingham school located on the corner of 13th Avenue and 23rd Street North, lots 1 and 2 of Block 663 in Druid Hills (then known as North Highlands). It was named for civil engineer William Barker, who laid out Birmingham's city center street grid and resided in the area for three decades before his death in 1899.

The central portion of Barker School was built in 1905. Invitations to bid stipulated that the building would contain a principal's office, a teachers' room, and at least eight classrooms, each with a capacity for 48 pupils. The building would also house a cloakroom with 96 numbered hooks and a washbowl, a 15-inch wide glass-fronted bookcase in each classroom, first-class blackboards, picture moulding, and daylight from the left or left rear of the pupils in each room. The basement was to have a concrete floor slab and be furnished with a manual training room with workbenches and a tool storage closet. The remainder to be used for hot air furnaces and janitorial storage. Automatic flushing toilets for boys and girls, telephonic or electric bells, and an electric fire alarm were also specified. The total cost of the school was not to exceed $25,000, of which $5,000 went for the land, $18,500 for construction and design fees, and $1,500 for furniture and equipment. The board set a date of March 27, 1905 to review architects' proposals.

Two wings were added to the school in 1910. By 1923 the school, with 16 classrooms of varying size, had an enrollment of 972 students in grades 1 through 7 and was judged to be "overcrowded" in the Board's survey of that year.

The school was destroyed by a fire which started in the boiler room during the early morning of March 14, 1941. The fire was discovered by Ralph Blue, a Birmingham Age-Herald paper carrier who noticed flames at 5:10 AM while working his route. Companies from Fire Station No. 1, No. 4, No. 5, No. 9, No. 11, No. 22 responded to the alarm, which Chief Alf Brown described as 'one of the meanest fires we've had in a long time." The flames, fueled by pine-framed walls was conducted from the boiler room to the roof through heat transfer ducts. The firefighters' efforts were hampered by the steep hilltop site. 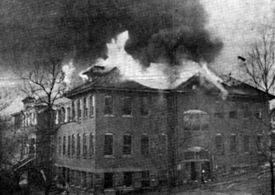 At the time of the fire, 527 students were enrolled in the school. They were transferred to Seventeenth Avenue, Norwood, Martin and Powell Schools. Henley School PTA president Harry Singler labelled the older Henley and Powell Schools as "firetraps" like Barker, and suggested that the board tear them down and replace all three with a single, modern combined school in a central location, presumably downtown near the existing Powell School site. Some parents of children that attended Barker resisted the idea of sharing a new school with children from the newly-opened Central City Housing Project, expressing concern over the risk of students having to cross the railroad tracks on 10th Avenue North. Ultimately, the insurance settlement was used to build a new 8-room addition to the Seventeenth Avenue School. The damaged building was demolished and the cleared site became Barker Park.