This article is about the historic landmark church in Collegeville. For other churches with the same name, see Bethel Baptist Church (disambiguation). 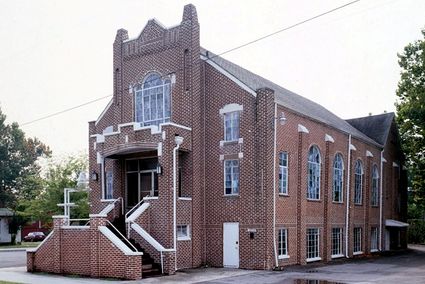 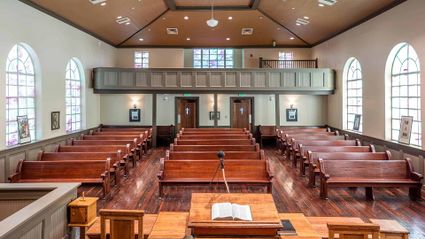 Bethel's original sanctuary is located a block away from the present church at 3233 29th Avenue North. It was built in 1926 of red brick with stone lintels and trim. The interior is outfitted with stained glass windows and carved wood pews for 450 congregants. A two-story wing facing 32nd Street houses mechanical rooms, bathrooms, classrooms and offices.

The exterior brick is striated on the street facades and common brick on the sides and rear. The original mortar was tinted with iron ore, but the joints have since been repointed with white cement mortar. The main floor level is indicated by a soldier course. 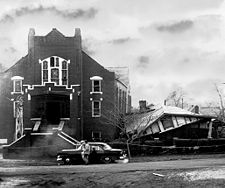 Aftermath of the 1956 bombing which destroyed the parsonage

The church became notable for the leadership of its pastor, Fred Shuttlesworth during the Civil Rights Movement. It served as the headquarters of the Alabama Christian Movement for Human Rights and became a target of anti-integration violence.

The church was targeted three times by bombers: The first incident occurred on December 25, 1956, destroying the parsonage. Shuttlesworth, who was in the building, was left unscathed by the blast. The apparent miracle strengthened his will to lead efforts for integration in Birmingham.

The second bombing attempt, on June 29, 1958, was discovered by a passing restaurant worker. Civil Rights guards organized by Colonel Stone Johnson removed the bomb to a roadside ditch before it exploded, damaging windows for blocks around.

A third bomb was planted on December 14, 1962, causing minor damage.

In the early 1990s the church began planning for a new sanctuary. They decided to purchase a former parking lot on the corner of 29th Avenue and 32nd Street North for the new building so that the 1926 building could be preserved. Groundbreaking for the new sanctuary was held in August 1995. The older church building is used primarily as a Civil Rights Movement shrine and museum, currently owned and maintained by the Bethel Baptist Church Historic Community Restoration Fund.

On April 5, 2005 the 1926 church, along with the 1957 parsonage and the James Revis residence across the street, which served as a guard house, were jointly granted National Historic Landmark status.

In December 2007, Bethel launched a $2 million fund-raising campaign for restoration of the original church and construction of a memorial garden. A national "Buy a Brick" campaign began in January 2008. During the city's Martin Luther King, Jr Unity Breakfast on January 21 Mayor Larry Langford announced that the city of Birmingham would increase its pledge to the campaign from $50,000 to $1 million. Brice Building Company was selected to perform the restoration and repair work in May 2009.

In May 2008 the Rotoract and Rotary Club of Birmingham constructed a playground at Bethel Baptist Church, where the Rotary Club runs a preschool learning program.