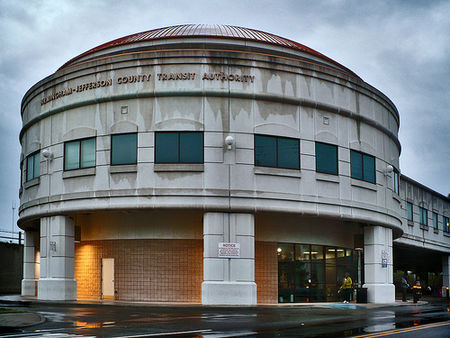 The Birmingham Central Station or Birmingham-Jefferson County Transit Authority building was a multi-modal transit hub and office building located at 1735 Morris Avenue in downtown Birmingham. The station was constructed atop the site formerly occupied by the Banana Warehouse demolished in 1996.

The two story, gold domed facility designed by Volkert & Associates was officially dedicated on June 25, 1999. The facility served as the headquarters for the Birmingham Jefferson County Transit Authority as well as the main terminal for all MAX buses. In June 1999 a resolution to name the soon-to-be completed facility "Nina Station" in honor of former City Councilor Nina Miglionico was submitted and withdrawn without a vote.

The station was demolished in 2015 to make way for a $30 million Birmingham Intermodal Facility which will combine operations of MAX regional buses, Greyhound intercity buses and Amtrak passenger rail.