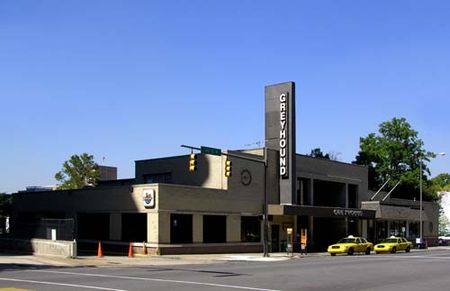 From the southeast in October 2010.

The Birmingham Greyhound Station is a former bus terminal on Block 35, on the 700 block of 19th Street North facing Birmingham City Hall adjacent to a former terminal.

The building, developed for Southeastern Greyhound Lines, was initially planned for what had been a vacant parcel in 1941. The project was delayed by World War II, and was not completed until 1951. It was designed by Louisville, Kentucky architect W. S. Arrasmith in the "streamline moderne" style that Greyhound favored. The exterior was cream-colored brick with limestone trim. The interior featured plastered walls and terrazzo floors. The station was constructed by the Brice Building Company for $750,000.

The station was designed to accommodate 30 buses arranged according to a "scientific" plan that made it, "impossible to get on the wrong Greyhound bus." The design of the Birmingham station was adjusted to accommodate separate waiting rooms and restaurants for white and black passengers. In addition to Southeastern Greyhound, the terminal accommodated buses operated by Teche-Greyhound, Dixie Greyhound and Alabama Coaches.

During the Freedom Rides in May 1961 the Greyhound coach bound for New Orleans via Birmingham was firebombed in Anniston on May 14 and never arrived. The next day, U.S. Attorney General Robert Kennedy pleaded with station manager George Cruit to find a driver willing to take stranded passengers on to Montgomery. The transcript of their telephone conversation, released to the media, fueled suspicions that Kennedy had instigated the demonstrations.

Greyhound relocated its bus services to the newly-built Birmingham Intermodal Station in 2017. In June 2019 the former station building was sold to developer Mike Mouron for $2.06 million. He plans to restore its original architectural design and lease space to office tenants. Over the next year, Mouron acquired two vintage passenger buses to convert into casual meeting spaces. The Birmingham Design Review Committee approved the exterior design and materials in December.