The Freedom Rides were a series of bus trips undertaken by Civil Rights demonstrators to test the implementation of Supreme Court decisions upholding desegregation in facilities used by interstate passengers of public transportation.

Before 1961, bus companies operating in the South complied with State and local laws mandating racial segregation on buses and in bus stations, despite Supreme Court rulings establishing that such laws placed "an undue burden on commerce"1., and that the power to regulate interstate facilities rested with the Interstate Commerce Commission (ICC) established by Congress2.. The ICC, meanwhile, had determined in the wake of Brown v. Board of Education of Topeka (1954), that segregated seating on buses conflicted with the Interstate Commerce Act of 1887 and was therefore unlawful. It did not enforce that ruling, however, until called upon to do so by Attorney General Robert Kennedy in the wake of the Freedom Riders' demonstrations.

The Boynton v. Virginia case, brought on behalf of Selma attorney Bruce Boynton with Thurgood Marshall, applied the interstate commerce clause specifically to passenger facilities. The Supreme Court's decision, authored by Hugo Black, was issued on December 5, 1960. The Congress of Racial Equality (CORE) immediately organized to test the ruling. The first group of 13 riders left Washington D.C. on May 4, 1961, split between Greyhound and Trailways buses en route to New Orleans, Louisiana. The group of thirteen had originated with the Nashville Student Group which had conducted successful sit-ins at lunch counters and movie theaters in Nashville, Tennessee.

The two buses made relatively peaceful progress through the Atlantic states, except for an incident in Rockville, South Carolina where they were met by a mob and John Lewis was injured. Stops in Athens and Atlanta, Georgia proved peaceful, but the riders had been warned about what awaited them in Alabama.

They were right to worry as organized resistance to "outside agitators" was well under way, not only from the Ku Klux Klan and other anti-integrationist groups, but also from local law enforcement officials. In Birmingham members of the violent Eastview 13 Klavern had been informed that Bull Connor wanted to give them 15 minutes of free reign at the downtown bus stations before city police would respond. At the state level, Governor John Patterson and Public Safety commissioner Floyd Mann announced that they would be unable to provide protection for the demonstrators who had chosen to flout the law. "When you go somewhere looking for trouble, you usually find it," he said, "You just can't guarantee the safety of a fool and that's what these folks are, just fools." Officials at all levels proved uninterested in actively preventing violence or in investigating or prosecuting those who assaulted the demonstrators. 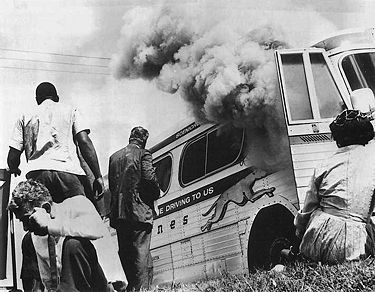 A Greyhound bus carrying Freedom Riders was attacked outside Anniston on May 14, 1961

The bus reached the seemingly-vacant Anniston terminal at 1:00 PM (Central time) and was soon rushed by a shouting mob of about 50 men armed with pipes, clubs and chains. Cowling and Sims rushed to the door to prevent attackers from boarding. Instead they vandalized the bus from outside, smashing windows and slashing the tires for 20 minutes before police arrived and escorted the crippled bus away from the station.

The police escort left the bus at the city limits, but the mob followed in private cars. Two cars forced the bus to the shoulder on Alabama State Highway 202 just east of Bynum. The riders remained on the bus as it was once again attacked with crowbars. Cowling once again guarded the door. Two of the attackers, Roger Couch and Goober Lewallyn threw bundles of burning rags onto the bus through a broken window, causing some of the seats to catch fire and fill the interior with smoke. Most of the passengers escaped only after an explosion prompted the mob to step back long enough for Cowling to open the door. They were quickly set-upon and badly beaten before other Highway Patrolmen fired warning shots to break off the attacks. Genevieve Hughes was driven to a hospital by local residents after an ambulance company declined to respond. Eventually another ambulance arrived, and after a long standoff, transported the remaining riders to Anniston Memorial Hospital, where they were treated by a nurse on duty until a physician arrived much later. Only at the insistence of federal agents did the staff treat the African American riders, but they were all forced to leave as a crowd gathered and threatened to burn the building down.

With no local officials willing to provide transportation or escort, Perkins called Fred Shuttlesworth in Birmingham. He and James Armstrong recruited fifteen drivers to make the trip to pick up the choking, bloodied riders and bring them on to Birmingham. Despite Shuttlesworth's admonitions against bringing arms, the convoy carried several guns for protection. The charred skeleton of the bus followed later, towed to a Birmingham junk yard. 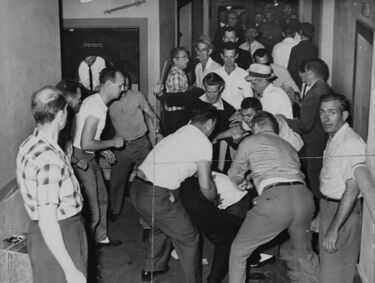 The Trailways bus left from Atlanta toward Birmingham on Mother's Day, Sunday May 14. On board were Freedom Riders Walter and Esther Bergman, Jim Peck, Charles Person, Herman Harris, Jerry Moore and Ike Reynolds. They were joined by Jet magazine reporter Simeon Booker and photographer Ted Gaffney and a smattering of plain-clothes Klansmen who had worked the ticket line discouraging other passengers from taking the bus to Birmingham.

Once on the road, the Klan toughs on board began making verbal threats to the Riders about what would happen to them in Alabama. They arrived in Anniston about 2:00 PM and warily made their way to the sandwich counter in the otherwise empty station. After re-boarding, the news reached them that the Greyhound bus had been attacked and that its riders were being transported to the hospital. Driver John Patterson (no relation to the Governor) warned the black riders that unless they moved to the back, that their coach would face a similar fate. The protesters refused, and were answered by violence from a small group of white men who had gathered. They did not return the blows and were badly beaten. The attackers dragged the semi-conscious demonstrators into a pile at the rear of the bus and took seats halfway up the aisle, refusing to let anyone else off.

Patterson then started the bus and made for Birmingham with a four-car police escort, taking back roads to avoid the mob reported to be lying in wait on the highway. They arrived at the Trailways Bus Depot in Birmingham just as the Klan "welcoming committee" regrouped, having been waiting for the other bus that never arrived. The men, armed with chains, sticks and clubs, had dashed the three blocks from the Greyhound station and quickly filled the smaller Trailways terminal. As the already-injured riders made their way into the building, they faced a new gauntlet of brutal attacks. Among the crowd of Klansmen was FBI informant Thomas Rowe and two plainclothes officers who would give the signal to disperse before the uniformed police arrived. Another group of militants from the National States Rights Party also arrived, causing Bobby Shelton concern that there might be uncontrolled violence that would get his Klansmen arrested. Police Detective Tom Cook reassured him and suggested that the groups work together.

Also present were CBS News correspondent Howard K. Smith, in town filming the documentary "Who Speaks for Birmingham?", who had been tipped off by NSRP leader Edward Fields and had, in turn, passed the tip to Herb Oliver, who informed Fred Shuttlesworth. Shuttlesworth telegraphed Bull Connor and Police Chief Jamie Moore to request protection for the riders, but received no response. Birmingham Post-Herald photographer Tommy Langston was at Acton's Camera Store near the station. He caught wind of the commotion and snapped an infamous photograph of the mob in action before being chased out and kicked on the ground. Smith drove three of the victims, two of whom were bystanders caught up in the melee, to his hotel for interviews.

The worst injured were taken to University Hospital, where the white victims were treated by white doctors and the African Americans by Indian residents. Langston's photograph was published five-columns wide in the next morning's paper. At least six of the attackers were arrested over the following months, and were generally charged with disorderly conduct and fined. 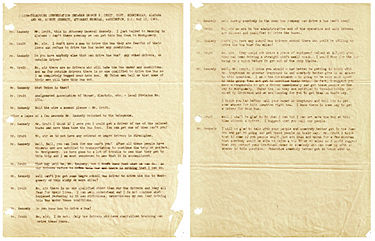 On Monday, May 15, United States Attorney General Robert Kennedy began making phone calls to try to negotiate safe passage for the Freedom Riders out of Alabama. With Governor Patterson unavailable, he had secured a promise from Public Safety Commissioner Floyd Mann to provide safe escort for the buses, but had less luck finding a driver. His conversation with Birmingham Greyhound station manager George Cruit was transcribed and preserved. In it Cruit repeatedly asserted that no driver was available. All of the members of the Amalgamated Association of Street and Electric Railway Employees Local No. 1314 refused to drive out of fear for their lives and no other drivers were qualified to operate the company's equipment. In frustration, Kennedy informed Cruit that "I am— the Government is going to be very much upset if this group does not get to continue their trip." That comment, released to the media in a hearing, fueled conspiracy theories that the government, or the attorney general himself, had instigated the Freedom Rides.

These efforts did not effect the desired result and the Freedom Riders elected to continue by air in order to be able to attend their scheduled rally in New Orleans.

Despite Kennedy's pleas for a "cooling off period", additional groups of Freedom Riders were quickly organized by CORE and the Student Nonviolent Coordinating Committee (SNCC), and they continued to challenge local enforcement of Jim Crow laws throughout that Spring and Summer. Kennedy dispatched John Siegenthaler to negotiate with state officials in person. With some notable exceptions, later riders were escorted by police and National Guard troops to prevent recurrences of violence on the road. 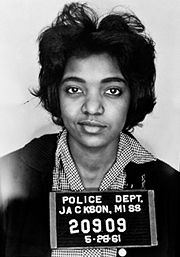 Birmingham native Catherine Burks was among those arrested in Jackson, Mississippi

Demonstrators, however, continued to defy local laws during stops and some were arrested in Birmingham, Montgomery and Tallahassee, Florida. Birmingham Public Safety Commissioner Bull Connor was warned by Shuttlesworth of the pending arrival of another group from Nashville on May 17. He met the group, which included John Lewis and Catherine Burks-Brooks, and placed them in "protective custody;" then personally drove the lead car in a convoy that took them within sight of the Tennessee state line the following night.

Most of those demonstrators returned to Birmingham by private car the next day, planning to rejoin their colleagues and continue through Montgomery. Shuttlesworth was arrested again when he tried to board the bus with them, but the rest of the group was ushered safely away. That group, however, was met by an organized mob in Montgomery on May 20. Siegenthaler arrived at the scene of the fight and was struck unconscious while attempting to help the riders escape. Floyd Mann took charge of dispersing the mob himself until uniformed Montgomery Police finally appeared and began restoring order. Governor Patterson repeated his revulsion for the "rabble rousers... flouting our customs and traditions." and U.S. Marshals and border patrol agents were put on alert to prevent further outbreaks of violence.

Over 300 riders were arrested in Jackson, Mississippi, and many endured brutal conditions at the Mississippi State Penitentiary. Full desegregation of interstate bus facilities came in November, as Kennedy implored the ICC to enforce its regulations in the South.

White-owned media outlets in the South were universal in their condemnation of the Freedom Riders and there was widespread fear that such "outside agitators" were extremists bent on the destruction of traditional society. They were often conflated with the Communist Party and foreign interests. Their undeniable courage, however, lent strength to local leaders intent to see Civil Rights granted equally to all citizens.