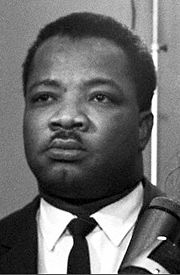 King was the youngest of three children born to Martin Luther King, Sr and his wife Alberta Williams King in Atlanta. In his youth his rough reputation and disinterest in school contrasted with his older brother, Martin Luther King, Jr. He married Naomi Barber on June 17, 1950 at the age of 17 and started a family which eventually produced five children.

Though he initially was uninterested in ministerial work, King began assisting his father at Atlanta's Ebenezer Baptist Church in the 1950s and began attending Morehouse College. When he graduated in 1959 he accepted the call to pastor Mount Vernon Baptist Church in Newnan, Georgia.

Shortly after being arrested at a mass sit-in at Atlanta lunch-counters, King moved to Birmingham to become pastor of First Baptist of Ensley. He was installed on March 18, 1962. His family moved into the parsonage nearby. King became involved in the Alabama Christian Movement for Human Rights which was founded by fellow pastor Fred Shuttlesworth and was instrumental in helping plan and organize the Birmingham campaign led by the ACMHR and Martin Luther King's Southern Christian Leadership Conference.

During the campaign King joined Reverends John Thomas Porter and Nelson H. Smith on the Palm Sunday march to Birmingham City Hall and was arrested and jailed for parading without a permit. He was released after a truce was announced between movement leaders and Birmingham's business and political leadership. He returned home on May 11 and began preparing a Mother's Day sermon for the next morning.

At 10:45 that night, however, King's home was bombed by Ku Klux Klan members. He shepherded his family safely out the back door just as a second blast blew his front door to pieces. That event and another bombing a few hours later at the A. G. Gaston Motel touched off several hours of rioting, despite pleas from Reverend King and other ministers who urged peace and faith.

Another riot followed the bombing of Arthur Shores' home in August of that year. A. D. King climbed onto a parked car in the midst of the rock-throwing and pleaded with the crowd to disperse peacefully, telling them "If you're going to kill someone, then kill me." (NY Times - 1963)

In 1965 King became the pastor of Zion Baptist Church in Louisville, Kentucky. He continued to work for civil rights and led a campaign for an open-housing ordinance which passed in 1968. He chose not to take up the mantle of leadership of the SCLC after his brother's assassination in April of that year, but he did continue working with the group in its Poor People's Campaign and other efforts. Zion Baptist was bombed in August 1968.

King left Louisville to return to Ebenezer Baptist in Atlanta and became a co-pastor in September 1968. On July 21, 1969 he was found drowned to death in the swimming pool at his home. Some have speculated that his death was not accidental. He was survived by his wife and five children (Alveda, Alfred II, Derek, Darlene and Vernon). Alveda maintains an "A. D. King Foundation" in Atlanta.